Taroudant - Advertising is a powerful tool used by companies to promote their products and present them to consumers. 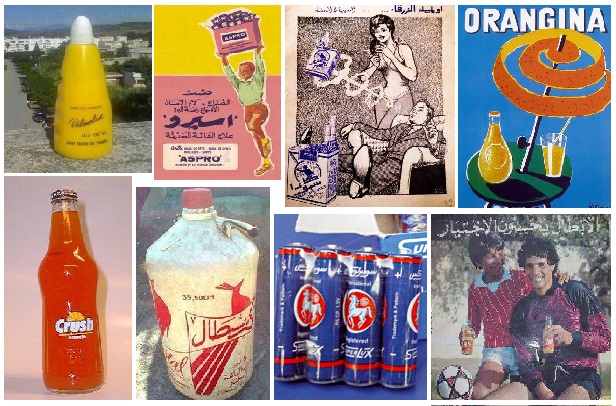 By
Larbi Arbaoui
-
Larbi is a freelance writer and assistant editor at Morocco World News.
Nov 28, 2015
Spread the love

Taroudant – Advertising is a powerful tool used by companies to promote their products and present them to consumers.

It has been an effective tool in persuading customers and precisely shaping their behaviors via radio and later through television starting in the late 1940s.

Everybody can remember with nostalgia how we were amazed by the ads we loved when they showed up on TV.

Unlike today’s ads, advertising products in Morocco in the 1980s and 1990s, as in most other countries at the time, were very simple and direct without subliminal messages or indirect language.

We present to you a collection of the most prominent commercials that promoted luxury products in Morocco during those decades.

Palmolive shampoo is a product of Colgate-Palmolive, an American company focused on the production, distribution, and provision of household, healthcare, and personal items such as soap, detergent, and oral hygiene products.

The company has been present in Morocco since the early 1960’s, according to L’Economiste. 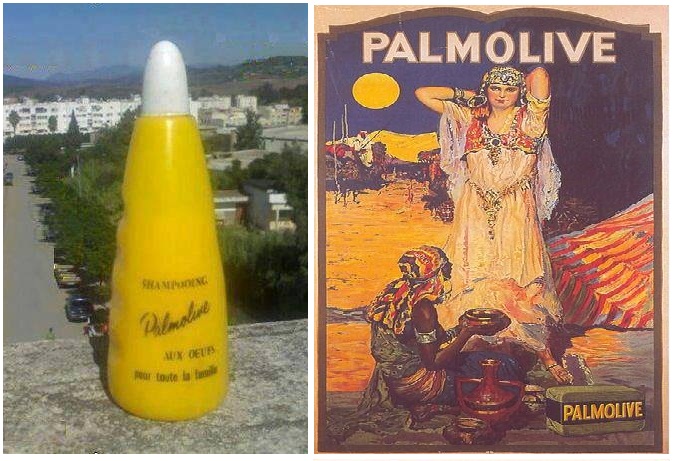 Superlux is a brand name of Moroccan batteries, manufactured by ‘L’Electrochimie Africaine’, based in Tangier. Everyone in Morocco knows the brand, famous for its white horse advertising dating back to the 1980’s.

Orangina is the French trademark of a non-alcoholic carbonated beverage made from oranges and lemons.

The video is an Orangina ad aired in Morocco in 1974. It shows Abdeljabbar Louzir, a famous Moroccan comedian, at a small shop in a deserted area asking for a large size Orangina. 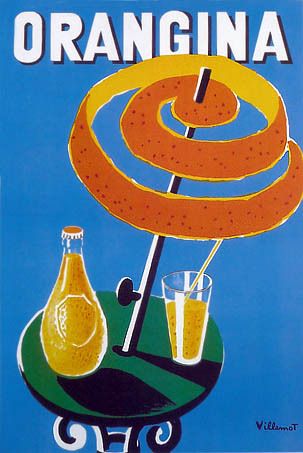 Lesieur was probably the most sold cooking oil from the 1970s to 1990s.

Though Moroccans mostly used olive oil for cooking and eating with bread, Lesieur, or Zit Romia as Moroccans called, was very present in Moroccan households. 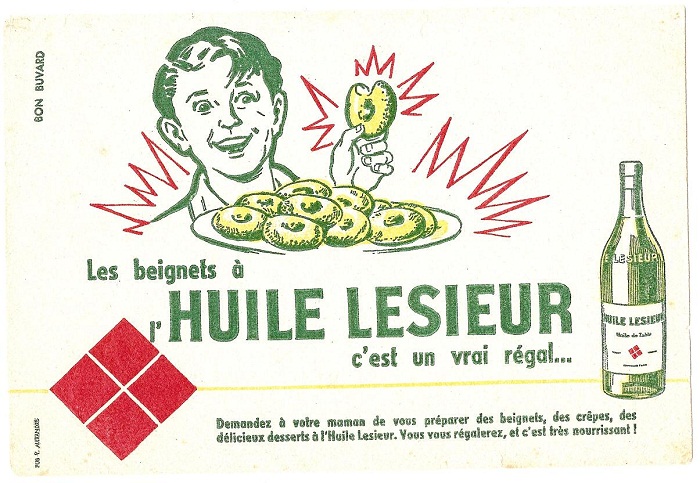 Introduced in 1942 in Morocco, Lesieur claims more than 40 percent of the market today. The brand enjoys a strong reputation and a strong market presence. 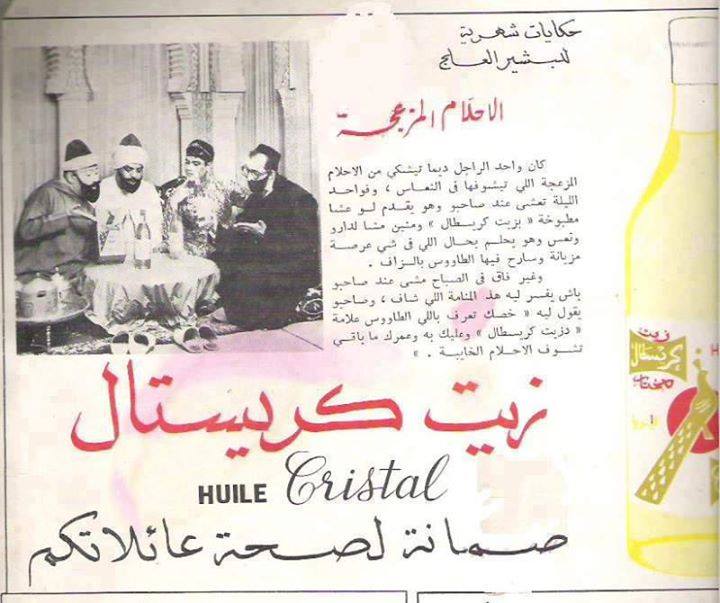 The ad told the story of a man called Lbashir Laalej who had nightmares every night. One day, he had dinner at his friend’s house (the dinner was prepared with Cristal oil). When he woke up in the morning, he remembered that he had dreamed of being on a green meadow full of peacocks. When he told his friend about his dream, he told him that the peacock was the symbol of Cristal cooking oil.

La Cigogne, Judor, and Sim were very popular soda beverages in Morocco before they were withdrawn from the market in 1997. 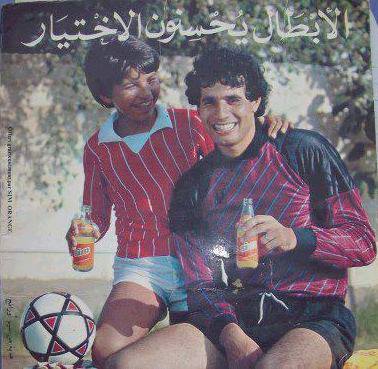 This poster features a young boy and former Moroccan national team goalkeeper, Badou Zaki, holding a Sim Orange drink with a slogan in Arabic that reads “Champions always make good choices.” Sim orange was presented as the drink of champions and associated with victory.

Manufactured by the French company, Danone, Raibi Jamila is a delicious pomegranate smoothie that has been famous in Morocco since 1966. 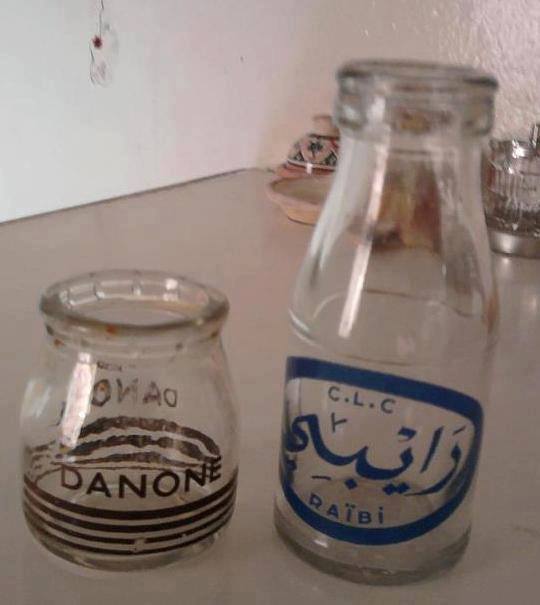 Aspro is a brand name for aspirin, which was famous among Moroccans as an effective temporary relief from headaches and pain related to fever. 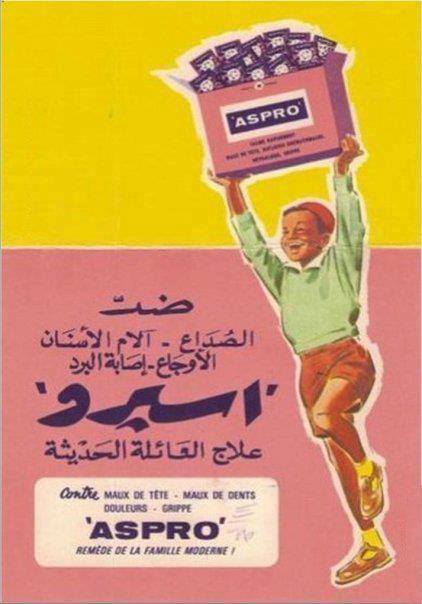 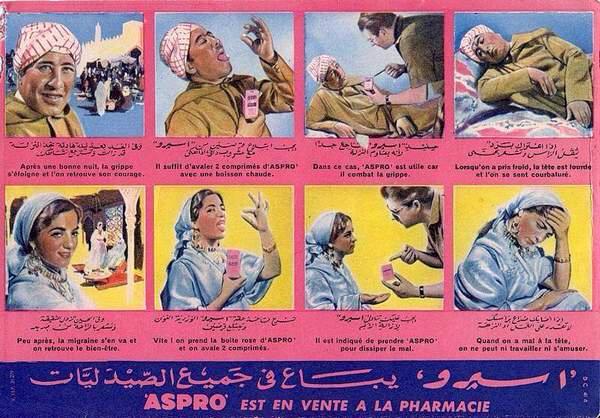 “La vache qui Rit,” meaning “the laughing cow”, is a brand of processed cheese products made by Fromageries Bel since 1865.

It is still the most popular cheese among Moroccans. For several decades, it was the only widely available cheese on the market.

Smoking used to be a  symbol of elegance and class. In 1935 Casa Sport appeared on the Moroccan market as an inexpensive cigarette consumed largely by the working class.

In this commercial, which appeared in 1966, the brand was associated with the Olympic movement and sports. 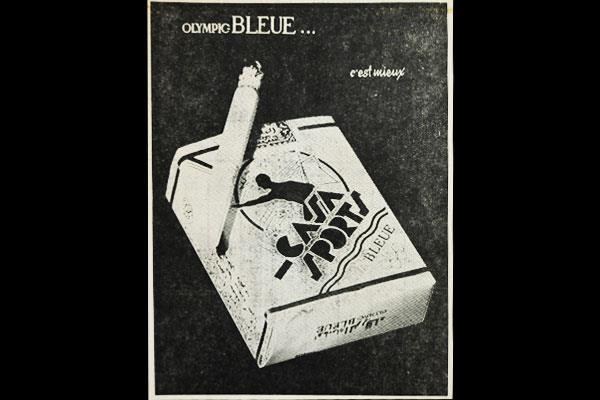 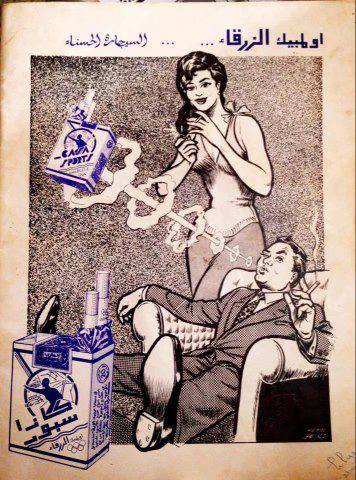