Rabat - Moroccan Foreign Minister Slaha Eddine Mezouar,  is due to receive the Personal Envoy of the Secretary-General of the United Nations for Western Sahara, Christopher Ross, as part of a new tour to the region to re-launch negotiations between Polisario Front and Morocco. 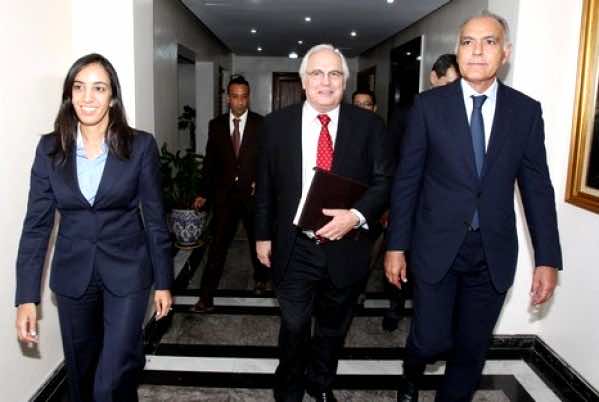 Rabat – Moroccan Foreign Minister Slaha Eddine Mezouar,  is due to receive the Personal Envoy of the Secretary-General of the United Nations for Western Sahara, Christopher Ross, as part of a new tour to the region to re-launch negotiations between Polisario Front and Morocco.

Le360, a website known for close ties with Moroccan royal palace quoted sources saying Ross is in Rabat and is due to meet with the Moroccan top diplomat, this Wednesday evening at the headquarter of the  foreign ministry.

At the time of writing, no official statement had been released about this meeting by the Moroccan foreign ministry.

According to Le360’s sources, Ross’s regional tour doesn’t include so-called Western Sahara, after Morocco declared him persona non-grata in the southern provinces earlier this month.

Ross kicked off his regional tour in a aim to revive negotiations regarding the Sahara issue on Monday, with a visit to Algeria.

He was received by Algerian President Abdelaziz Bouteflika in Algiers, in a meeting attended by Algeria’s Minister of State, Minister of Foreign Affairs and International Cooperation Ramtane Lamamra, and the Minister of Maghreb Affairs, the African Union and the Arab League Abdelkader Messahel attended the hearing.

“The President renewed Algeria’s support as a neighboring country to the UN process and I am grateful for that,” Ross told Algeria’s Press Service (APS).

“UN Secretary General Ban Ki-moon asked me to intensify efforts to finding a solution in accordance with the successive resolutions of the UN Security Council,” he stressed, adding that President Bouteflika “encouraged me in that direction and assured me the support of Algeria,” he concluded.