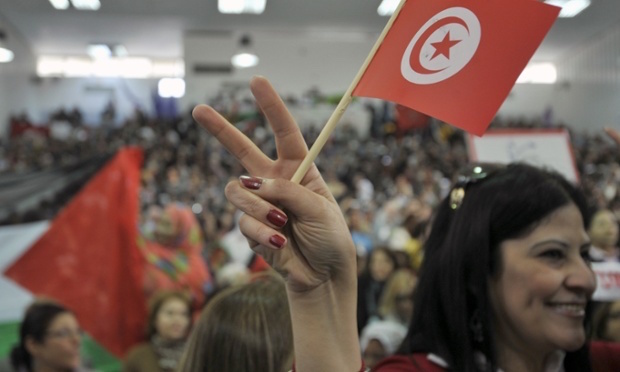 Rabat – After several weeks of demonstration against the government, Tunisian leader Ben Ali stepped down on January 14, 2011, leaving his home country for Saudi Arabia. Today, the Tunisian people are still struggling to establish a new democratic country.

At first sight, it may seem to us that the democratic transition in Tunisia has been smooth and devoid of obstacles. However, such superficial analysis is inapplicable to the current Tunisian reality. Just after Ben Ali’s departure and during the constituent assembly election, three governments have been elected alongside presidential and legislative elections.

It is presumed that the periods following revolutions are complicated and full of challenges. They are characterized by instability and unrest.

Accordingly, in the Tunisian context, the pro-revolution government ought to tackle the accumulated challenges and problems from the old regime.

At the security level, the government has to deal with terrorism issues and the proliferation of weapons from neighboring countries. In the meantime, a series of terrorist attacks and political assassinations have rocked the region, hindering the Tunisian transition into a democratic country. At the socio-economic level, balancing long-term reforms with the immediate demands of the people has been another big challenge.

Despite these ongoing challenges, the Tunisian democratic model has achieved several things. One of them is the Troika coalition, which has paved the way to democracy. Consisting of the Islamic Ennahda movement and secular forces, this coalition aims to prevent a religious-secular polarization at a critical period in Tunisia’s history, an initiative that has not happened in the other so-called Arab Spring countries.

The other factor resides in Ennahda’s political behavior during this critical period. Its refined conception of politics and country can be seen in its political practice throughout the democratic transition period. For example, looking at the new constitution as a compromise between political and civil forces, Ennahda made concessions at ideological levels while its new content was being drawn up.

The paramount concern of Tunisians has been to democratically build the country regardless of electoral legality.To that end, they joined efforts to establish post–revolution Tunisia in a distinct manner. Therefore, they have, to some extent succeeded in giving us a lesson in democracy.

In fact, although democracy in Tunisia is still in its very inception, the Tunisian experience and its democratic transition have been exceptional and unique compared to other countries that were also impacted by the so-called post-Arab Spring.