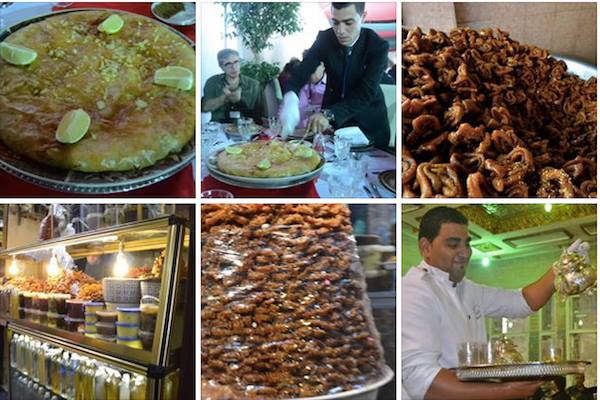 Fez – Despite losing its status as capital of Morocco in 1912, Fes is still the Moroccan capital of food. And Fassi cuisine is among the world’s best.

Over the course of decades, Fes has become a destination for many Moroccan and non- Moroccan visitors who want to enjoy the luxurious tastes of foods served in its homes, restaurants and cafes. In Fes, one can broaden one’s culinary horizons and fulfill one’s desires for new tastes.

Each region in Morocco has its special dish and method of preparation. For example, one can sample zinabah in the Sahara, tanjia in Marrakesh, rziza in Rabat, berkokouch in Oujda, along with many other foods, both spicy and non-spicy. Food plays an important role both in our culture and in our relationships. As Jean Anthelm Brillat-Savarin stated, “tell me what you eat and I will tell you what you are.” In the context of Fassi cuisine, this proverb would mean that the type of food you eat, how you prepare it, the ingredients you use to make a certain recipe and ultimately how you share it can define whether you are from Fes or not.

Foods that are very popular in the capital of spirituality are various and unique. Yes, it is true that we can find the same dishes in other regions in Morocco, but they don’t taste the same as they do in Fes. The following dishes are four of the most popular and representative of Fassi cuisine.

Khli’i is considered the favorite dish of people in Fes and its surrounding regions. The name khli’i springs from the term to preserve something for a long time until it becomes ready to be consumed. This type of food is made of kaddid, which is a combination of beef ribs, salt, altsfirh, cumin, coriander, and oil. We cut the beef ribs into thin pieces, mix with the spices and oil, and hang the pieces in a sunny place for up to three days or until they are dried. To make the khli’i, we put the kaddid pieces in fire, then we add a boiled robe with one letter of oil. Finally, it is put in a glass bottle in the refrigerator. It is served hot for lunch or dinner or, as some people prefer, with tea in the morning.

Even when you ask for this food in another Moroccan city, the restaurant owners, in order to persuade you of the quality of the dish, will tell you that their khli’i is imported from Fes. The superior quality of khli’i from Fes is acknowledged by Moroccans in all regions of the country. 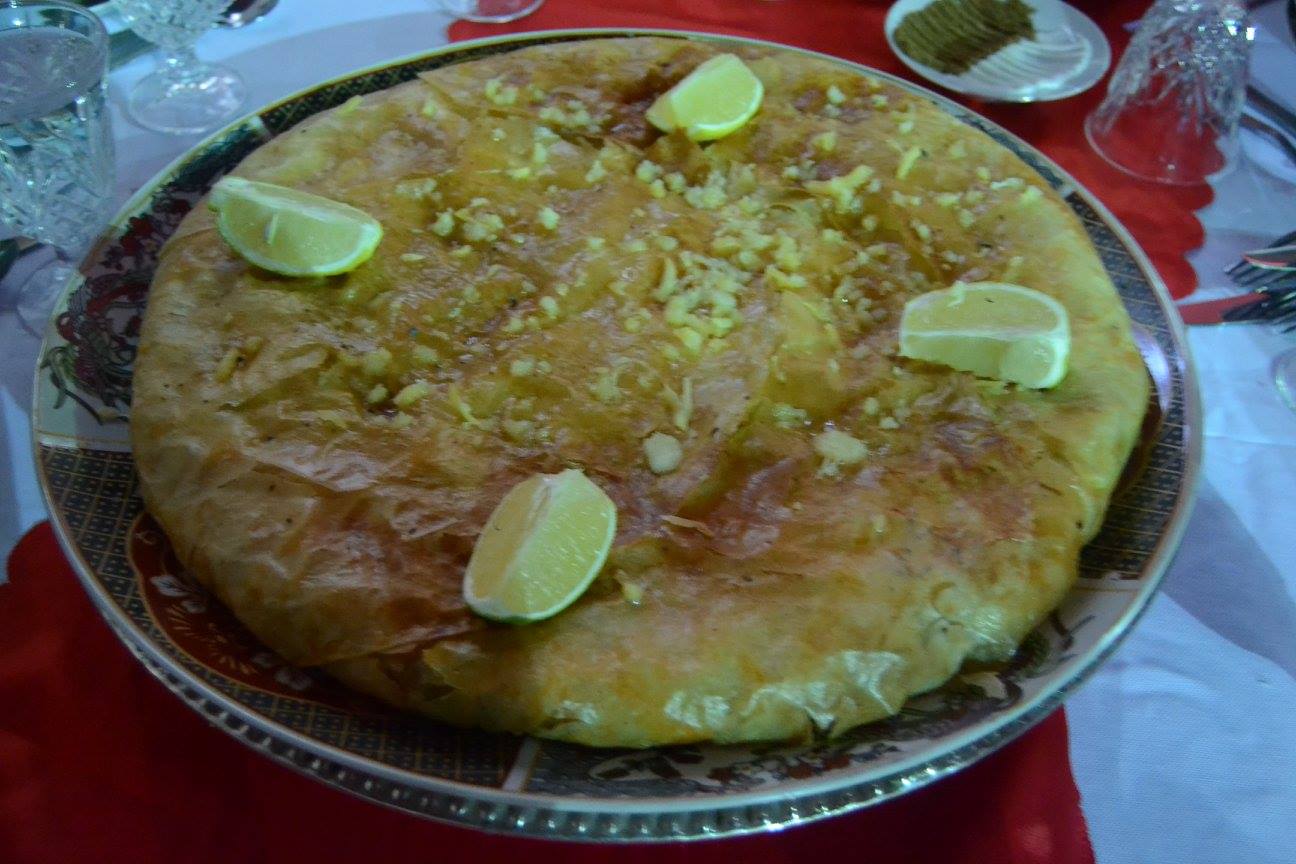 Bastilla is served in Fassi houses to welcome guests and to show them kindness and generosity. A favorite dish for important Fassi ceremonies and meetings, it demonstrates a mixture of cooking tradition and art that typifies the culture of Fes.

Bastilla is prepared with chicken (or fish), phyllo pastry leaves, eggs, and pecan. After we cook one chicken with onions and spices, we separate the chicken from the spices and add eight or more eggs. Then, we put one pastry leaf in a dish and add the onions and eggs. In the opposite direction we put another leaf and we add the chicken, cut in small pieces. Then we put a third pastry leaf and we add the pecan. After covering the dish completely with a fourth pastry leaf, we bake the bastilla in an oven. After it is cooked and the pastry is browned, we decorate it with sugar and cinnamon.

There are many other techniques for preparing this dish, but this way is the one used most often in Fez. What is striking in this dish is the fascinating combination of savory and sweet flavors which differentiates it from customary Moroccan dishes. 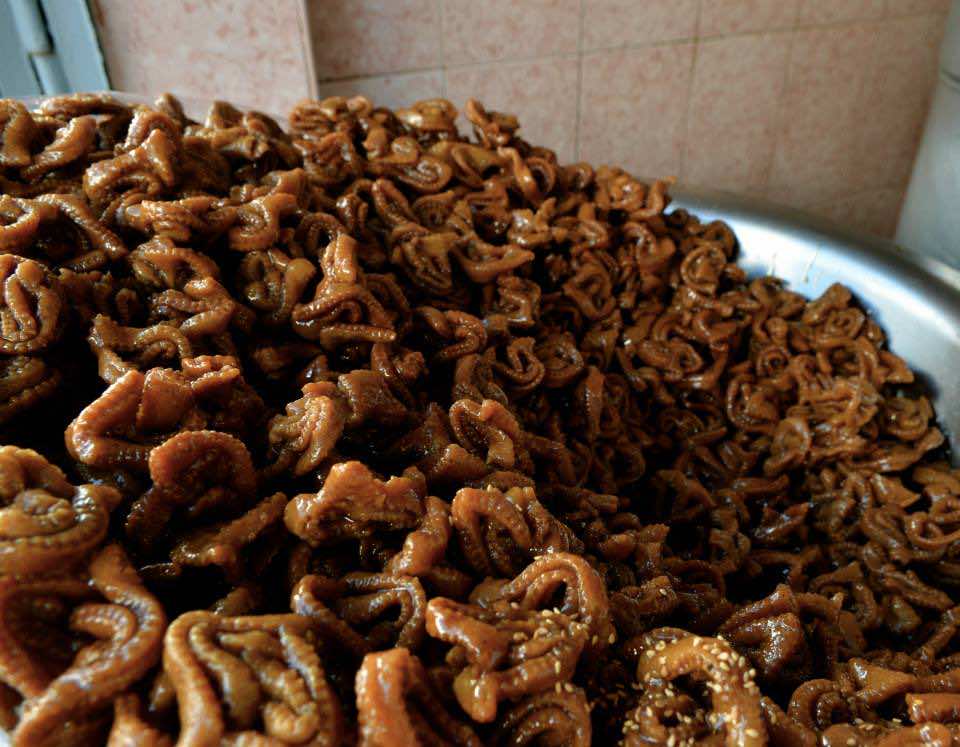 Chebbakia, a small piece of twisted dough that is deep fried and soaked in honey, is served during Ramadan as a necessary part of the breakfast meal, but it is also served with harira (a Moroccan soup) during the rest of the year. 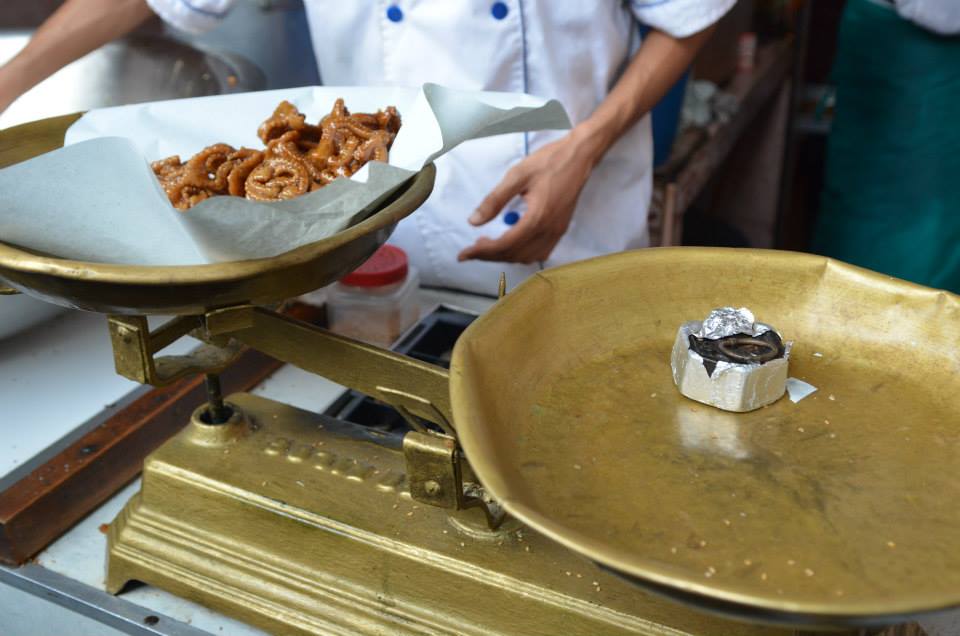 In Fes, it is found year round as the most popular piece of food in the old medina, along with other small pastries like the triangle-shaped briwat. It is true that this kind of food is served in almost all parts of Morocco, but what is special about it in Fes is the originality that led to the invention of other shapes and decorations as well as other flavors. Chebbakia is prepared with a light dough containing a mixture of flour, milk, sugar, butter, a substance called nafa’a, and pecan. The dough is fried in oil, soaked in honey, and then decorated with sesame. Although this is the common method, Fes continually comes up with different tastes and interlaced shapes. Fassi chebbakia might be shaped like figs or round and decorated with various types of dried fruits.

If you pay a visit to Fes, you can’t go back to your city/country without carrying with you some pieces of that particular kind of sweet. Made from figs, pecans, peanuts, cashews, walnuts, and caramel, the pieces vary in color and taste of according to the ingredients used.

With technology and the various cooking programs that are shown regularly on the Moroccan TV and radio, people all over Morocco can prepare many types of food and invent new meals. Still, Fes will be always the best site to prepare and serve food; it is the city which exports more types of food to cities in Morocco and abroad.

These are only some examples of the famous foods of Fes; the list is very long. Even in newly-invented dishes, Fes cuisine combines tradition and art. Its creators are concerned not only with very pleasant tastes, but also with the physical outline of the dishes, using their special artistry to produce the unique foods of Fes and to differentiate them from the foods of other cities of Morocco.