Rabat - A young man taped $60 worth of dollar bills to his suit and walked around a busy street in New York with a sign that reads, “Take What You Need.” 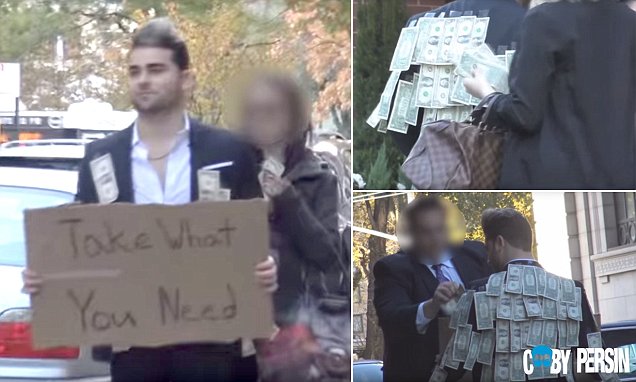 Rabat – A young man taped $60 worth of dollar bills to his suit and walked around a busy street in New York with a sign that reads, “Take What You Need.”

The whole story is a social experiment conducted by Coby Persin to see whether people would only grab what they really need.

Coby was surprised to see that people in suits and with designer handbags greedily took note bills off his suit.

A nicely dressed man with a hand bag, apparently not a needy person, stopped the young man and picked off few dollars.

“You really need this money? It doesn’t look like you need this,” Coby told him as the many grabbed the cash.

Some pedestrians stopped to pick some dollars off the suit of Coby even though they really don’t need them.

A woman with a Louis Vuitton purse stopped Coby and plucked $18 dollars to pay for her nails care, as she said in the video.

A homeless person asked Coby if he can take some money. Surprisingly, the homeless person took just $2 “to get some food,” asking Coby to give the rest to the other people in need.

“Yeah, that’s it. I just need $2. I’m just trying to get some food. Just give whatever you gotta give to other people,” the homeless man told Coby.

Moved by the contentment of the homeless person, Coby gave him $60 dollars so that he and his dog could buy food for a few days.