Paris - King Mohammed VI stressed this Monday in Paris that the United Nations conference on climate changes (COP21) is an opportunity to consolidate a comprehensive, operational, balanced, universal legal instrument that will make it possible to keep global warming below two degrees Celsius and move towards a low-carbon economy. 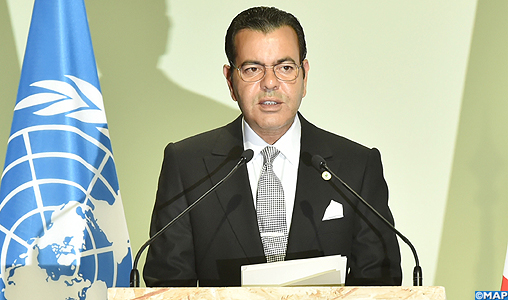 Paris – King Mohammed VI stressed this Monday in Paris that the United Nations conference on climate changes (COP21) is an opportunity to consolidate a comprehensive, operational, balanced, universal legal instrument that will make it possible to keep global warming below two degrees Celsius and move towards a low-carbon economy.

In an address that was read out by prince Moulay Rachid at COP21 opening session in the presence of the Sovereign, the King insisted that “a genuine, inclusive international consensus is imperative. It requires that we support developing countries in their endeavor to fully embrace the Climate Action agenda.”

After warning that the threat is global and will spare no single country, region or continent, the King stressed that “doubt and skepticism are no longer acceptable. Nor will it be possible to continue using the alibi of wrong priorities.”

“The community of nations has turned its back on our children’s destiny and future for far too long”, said the Sovereign.

The King surveyed Morocco’s strategy for over half a century, highlighting the dam-building policy as “a ground-breaking, far-sighted policy initiated in the early 1960s by my revered father, His Late Majesty King Hassan II. May he rest in peace.”

“Recognizing the importance of this key accomplishment for Morocco’s future, I have sought to reinforce it, and as a result Morocco now has 140 large dams, nearly a third of which have been built during the last 15 years,” the King went on, stressing that the Kingdom has also defended – albeit with some difficulty – a responsible fisheries policy, when negotiating with its partners, to protect its fish stocks.

The Sovereign went on that since the world became aware, in Rio in 1992, of the urgent need to address climate change, Morocco has “introduced a series of constitutional, legislative, institutional and regulatory reforms” as part of resolute endeavors to “ensure that its proactive policy on sustainable development and environmental protection is in line with the international community’s global effort.”

Steps cited in the Royal address include “the Environment Charter, the Green Morocco Plan, the Green Investment Plan, the ban on GMOs and the new law on plastic waste.”

“In keeping with the same approach which favors long-term objectives, the Kingdom of Morocco has become one of the main actors in the energy transition, in the world and especially on the African continent”, said the Sovereign who also explained that “the objective of securing 42% of the country’s energy mix from renewable sources by 2020 has recently been increased to 52% by 2030”.

“Morocco’s ambitious, substantial ‘Intended, Nationally Determined Contribution’ under the United Nations Framework Convention on Climate Change confirms the Kingdom’s avant-garde approach,” added the King who also pointed out that the Kingdom’s bid to host the COP22 in Marrakech in 2016 is part of this “irreversible commitment.”

After calling for “special attention” to be given to the African continent, the King argued that “The whole of Africa is experiencing an awakening. Africa is discovering itself and is gaining confidence. It is therefore in Africa – the continent of the future – that the planet’s future will be decided.”

The Moroccan monarch added that “promoting the transfer of technology and raising funds, particularly for the benefit of developing countries, is fundamental.”

The Paris Conference, and the one Morocco has offered to host in a year’s time in Marrakech, “will be instrumental in shaping the future which we are duty-bound to bequeath to our children”, the Sovereign further stated.