By
Karla Dieseldorff
-
Karla is an award-winning actress and producer.
Dec 1, 2015
Spread the love

According to Telquel, Moroccan Minister of Industry, Trade and New Technologies, Moulay Hafid Elalamy, confirmed the establishment of the Thalès in Morocco’s economic capital.

“The negotiations have advanced. The size of the site in Nouaceur is the only point that remains to be defined,” the same source said citing reliable sources.

The French aviation leader will launch its first factory in Moroccan territory in the Casablanca’s aircraft free zone.

According to the same source, Thalès, which specializes in defense and security, will mainly focus on the production of high-technology at its new Casablanca factory.

This is not the first time the aviation giant works in the Moroccan market. In 2005, the group was entrusted with carrying out the biometric identity card project with a budget of MAD 300 million, the same source noted.

Morocco has become the new favorite destination for the aviation industry. More than 110 international giants have chosen the North African country to open their doors, such as Bombardier, UTC, Safran, Segula, Minco, Nexans, Matis, Boeing, Zodiac, Crouzet, Atlantic Air, and Air France, among others.

Dassault and Safran, two French aviation companies that have subcontracted with Thalès in Morocco, have launched operations in Nouaceur.

Another company that has made Midparc its new home is Stelia Morocco, which will inaugurate its new plant on Wednesday.

Thalès Group is a French multinational company present in 56 countries. It designs and builds electrical systems and provides services for the aerospace, defense, transportation and security markets. Its headquarters are in Neuilly-sur-Seine, a suburbs of Paris.

Because of its strategic geographical location, Morocco is a central base with high-quality facilities and nearly 11,500 aviation professionals. 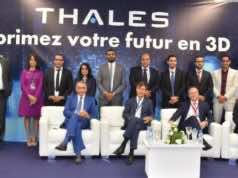