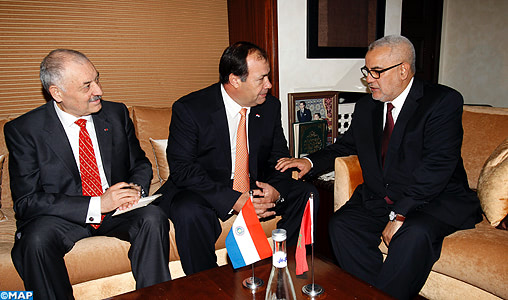 Rabat – Morocco will soon open its embassy in Paraguay in a move to deepen relations between the two countries.

Paraguay’s Foreign Affairs minister Eladio Loizaga made the announcement on Tuesday at the UN Summit on Climate Change (COP 21) in Paris, according to Prensa Latina, Cuba’s official state news agency.

In January 2014, Asuncion announced its decision to suspend the agreement it had signed with the Polisario in 2000, which formalized the establishment of diplomatic relations between Paraguay and the so-called RASD.

On the sidelines of the COP21, Loizaga met with his Moroccan counterpart, Salaheddine Mezouar, and discussed the details of the decision.

“Loizaga highlighted how Asunción begins to build a positive relation with the African country, consistent with the international policy of his government,” the agency said.

“For the opening of the embassy in Rabat a joint commission will be created, after which there will be assessments of the bilateral relations every six months,” Loizaga was quoted as saying.

The Cuban news agency added that the Moroccan Foreign Minister “expressed satisfaction with the opening of the embassy.”

Paraguay has already an embassy in Rabat, which is the only Paraguayan representation in Morocco.

Morocco has a consulate in Asuncion, the capital and largest city of Paraguay.