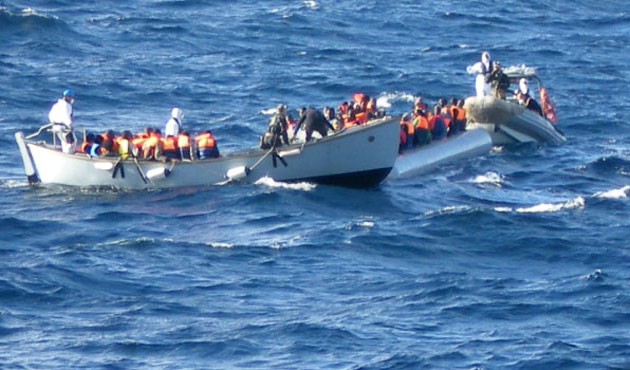 New York – A Spanish naval vessel rescued more than 280 Moroccan migrants at sea crammed together onboard a small boat in the Mediterranean Sea on Thursday.

According to a statement by the Spanish Ministry of Defense, the Spanish ship rescued 286 people on their way to Europe on a rudimentary vessel.

“The Spanish Navy frigate +Canaries+, deployed by mission of the European Union EUNAVFOR Sophia, rescued 286 people trying to reach Europe on board a wooden boat of only 15 meters long,” the ministry’s statement said.

After the migrants were rescued, the Spanish vessel sunk the wooden boat, which represented “a danger to navigation” since it was not “governable,” the Ministry informed.

The wooden boat with the migrants was located at dawn on Thursday by the sea rescue center of Rome, which alerted the Spanish vessel.

The rescued migrants were originally “from Somalia, Eritrea, Ethiopia, Libya, Mauritania, Yemen and Mali” as well as from Morocco, the Spanish Ministry of Defense noted.

The Sophia naval operation to which 22 European Union countries belong has rescued more than 5,700 migrants at sea, according to its commander, Vice Admiral Enrico Credendino.

EUNAVFOR Sophia has the jurisdiction to conduct arrests while at sea, and according to Credendino, it has arrested 40 suspected smugglers in the past.

Not all migrants are able to be rescued; over 3,5000 have died or gone missing in the Mediterranean Sea this year, according to the International Organization for Migration (IOM).

Headquartered in Geneva in 1951, the IOM has 157 member states and 10 observer states. IOM is dedicated to promoting humane and orderly migration for the benefit of all.