Amsterdam – It was a typical day for me, last Sunday. As usual, I was checking my Linkedin updates while watching the news.

All of sudden, the news caught my attention. It was telling me that Denmark’s center-right Venstre government is planning to confiscate the belongings of refugees when entering Denmark. This is one of a series of measures taken by Denmark to discourage refugees from entering into their country. I was glued to the TV screen. I could not believe what I was watching.

Denmark justifies this measure by saying that taking these valuables covers the costs of taking care of refugees. The Danish government also said that if refugees want government assistance, they must earn a limited income. According to the government, it is therefore alright for police to confiscate asylum seekers’ belongings upon arrival.

It is as though the government finds it normal to take away the belongings of people who just made the trip of a lifetime to escape horror and are in a state of shock. This is a bizarre concept alone as it implies refugees flee with suitcases full of diamonds and gold. I wish I could say Denmark stands out and that this is exceptional political behavior in Europe. However, for over a decade this biting wind blows not only in Denmark, but throughout Europe and is getting stronger by the day.

It appears Europe is lost in translation and has forgotten its own history. Little over eight decades ago, after the stock market crash of 1929, a world economic crisis broke out combined with the rise of national socialism and fascism resulted in that thousands of Jews fled and looked for a safe haven in Europe.

The current European argumentation regarding the refugees sounds exactly the same as in 1938. “It is simply too much, if we allow so much to enter Europe it will be at the expense of our autonomy and culture of our own people. Of course, the Jews in Germany are exposed to violence and discrimination, but they exaggerate the problem, they are mainly looking for better economic conditions. “

It appears to me, Europe repeats the same xenophobic behavior all over again.

Europe has reached a level of xenophobia that is  already becoming mainstream. In a newspaper, called Het Algemeen Dagblad, a popular Dutch presenter was interviewed regarding his program, All You Need Is Love, where he brings long lost families together, when asked if he would do the same for refugees families because these families are separated as well. He simply says: “What I prefer to see, are those that I understand immediately. Who speak Dutch, who have family or loved ones in another country. I rather see the look of a mother if we surprise her unexpectedly, than help people from foreign countries who we don’t understand. That’s not what All You Need Is Love” is about.

There is a tendency in The Netherlands that newspapers write more unencumbered that people of a certain authority say xenophobic things without being questioned. 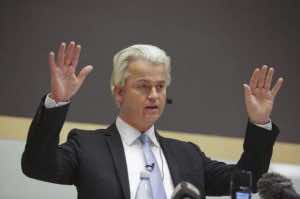 Another respected newspaper, De Volkskrant, writes without any noticeable concern that a Dutch politician of Moroccan descent probably will not be elected as chairman to the Dutch Kabinet. This is because the right-wing populist Party of Freedom leader Geert Wilers will oppose her appointment simply because she is Moroccan by origin.

The Party of Freedom was founded by Geert Wilders to break from the center-right into a stronger right, urging for more cultural assimilationist measures with regards to immigration. It was reported last year by The Gaurdian that Geert Wilders ensured there would be “fewer Moroccans” in the Netherlands. This anti-Islam sentiment created many police complaints against Wilders and led any Moroccans to withdraw from the party.

The immigration stances of the Party of Freedom are backed by other parties. This same newspaper, De Volkskrant, writes that the leader of the Right Liberal Party in the Netherlands, Halbe Zijlstra, wants to open the discussion on withdrawing from the UNHCR Refugee Convention. The reason is that he wants to prevent refugees from around the world from applying for asylum in The Netherlands. He wants to restrict the right to their own region. This same leader, Halbe Zijlstra, also said that refugees who come to Europe are not eligible for plastic surgery such as nose jobs and breast implants in the Netherlands.

In the meantime, people in Europe become angrier and fear the refugee influx and so-called politicians enhance the xenophobia to prey on this anger and fear.

Again, I am asking myself the question: is Europe heading to repeat its own history again like in July 1938, when a conference was organized by 32 countries to discuss the solution of Jewish refugees who were fleeing Germany? I am afraid history is repeating itself, but this time against Muslim refugees coming from war-torn countries, such as Syria.