Taroudante - King Mohammed VI of Morocco will inaugurate the first phase of solar plant “Noor I,” on Sunday in Ouarzazate, according to Minister Delegate in Charge of Environment Hakima El Haite. 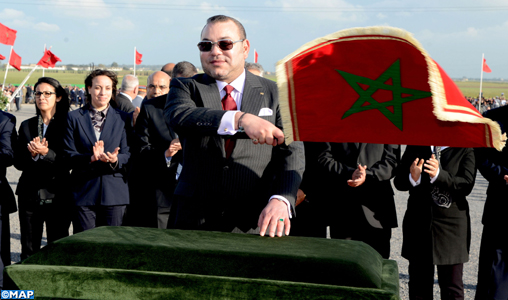 By
Larbi Arbaoui
-
Larbi is a freelance writer and assistant editor at Morocco World News.
Dec 26, 2015
Spread the love

Taroudante – King Mohammed VI of Morocco will inaugurate the first phase of solar plant “Noor I,” on Sunday in Ouarzazate, according to Minister Delegate in Charge of Environment Hakima El Haite.

The Noor Project will use a highly advanced technology called Concentrating Solar Power (CSP), which “allows to store energy for nights and cloudy days.”

This technology “uses mirrors to focus the sun’s light and heat up a liquid, which is mixed with water and reaches a temperature close to 400 degrees Celsius. This produces steam, which in turn drives a turbine to generate electrical power,” the Minister said.

Considered the world’s biggest concentrated solar power plant, the Noor is expected to produce enough energy for more than one million Moroccans, “with possibly extra power to export to Europe,” according to the World Bank.

The Noor Project in Ouarzazate has gained international media coverage, placing Morocco as a global “solar superpower” and one of the world leaders in renewable energy.

“There is a very strategic way in Morocco of diversifying energy sources focused in contributing to a green growth plan and become a model for Africa by 2020,” energy specialist, Roger Coma-Cunill wrote in a World Bank blog.

“Morocco seeks to be a gateway to Africa – that’s part of this endeavor,” he added.

By 2030, Morocco aims to produce about 52 percent of its energy needs from renewable energy.