New York - A protest in the state of Oregon has led to the occupation of a federal building this weekend due to a debate about the involvement of the federal government in local state issues. 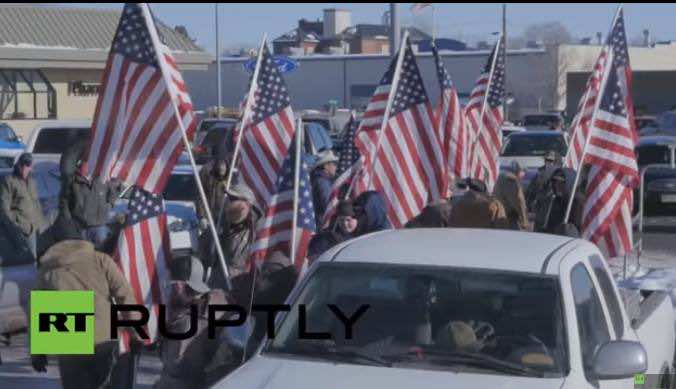 New York – A protest in the state of Oregon has led to the occupation of a federal building this weekend due to a debate about the involvement of the federal government in local state issues.

Armed protesters called on “American Patriots” to stand up and join them to fight against the government in Washington D.C. arguing it has no authority over local matters, according to a report by Reuters.

“All patriots it’s time to stand up not stand down! We need your help! Come prepared,” Ammon Bundy, who seems to be the leader of the armed men, posted on Facebook.

Footage of the protest and occupation has flooded social media networks. U.S. Army Veteran Blaine Cooper, dressed in full desert camo came out to support the ranchers saying “we’ve had enough of this tyranny, you are gonna leave us alone.”

Cooper urged citizens to not stop there but to “spread [the standoff] throughout the U.S.” because “the government has beat us and oppressed us and took everything from us,” he stressed, while adding “they will not stop until we tell them ‘NO’.”

“We’re going to be freeing these lands up, and getting ranchers back to ranching, getting the loggers back to logging, getting the miners back to mining where they could do it under the protection of the people and not be afraid of this tyranny that’s been set upon them,” Ammon Bundy stressed in a video.

According to Reuters, protesters said they would resort to violence if police try to remove them from the occupied premises.

The protest has captured the attention of social media networks under the trending hashtag #OregonUnderAttack. People are questioning why armed civilians are being allowed to protest in that manner.

“If they were Muslims, we’d be talking about bombing countries. But they’re white Christians. #OregonUnderAttack,” a Twitter user posted.

“A psychotic militia has taken over a federal building in Oregon. Tell me again how it’s Syrian refugees we’re supposed to fear,” another highlighted.

“So apparently you can walk up into a federal building looking like this & it just radiates peace,” a third user said in reference to the heavily armed military outfits worn by the protesters.

“Peaceful…with some military-grade weapons and said they’re ready to die there….sure, why not,” a young man tweeted in an ironic tone.

This is not the first time this kind of armed patriot protest takes place in the last two years. At least four instances can be recalled, the same source listed.

“Bundy Ranch” standoff participants at the April 2014 Nevada protest have come together during this weekend’s manifestation.

In November 2014 and again in August 2015, a group of armed citizens named the “Oathkeepers” patrolled the streets of Ferguson and Baltimore wearing chest rigs, AR-15 rifles and glock pistols.