Marrakech - He was about 30 years old, but the wrinkles on his forehead said more than his age, maybe he was a wise man. With his cart of vegetables, some of which were fresh and others were almost spoiled, he was always there, whether in sunny weather or rain. 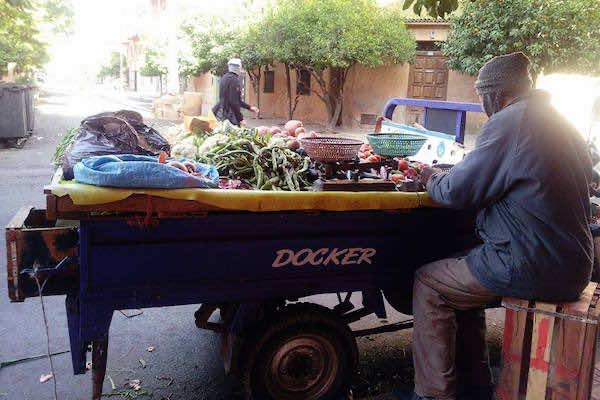 Marrakech – He was about 30 years old, but the wrinkles on his forehead said more than his age, maybe he was a wise man. With his cart of vegetables, some of which were fresh and others were almost spoiled, he was always there, whether in sunny weather or rain.

I chose to regularly buy vegetables from him since I discovered that he was a truthful and honest man. One day, I bought a Kilo of potatoes and two Kilos of carrots from him and I had to pay about MAD 15. I gave him MAD 20 and left without taking my change until he called me back. “Mr. Mohammed,” as he did not know my name, “you forget to take your change.” I thanked him and showed great appreciation for his honesty and kindness. At that time, I learned the name of the vegetable seller. It was Samkan.

Whenever I went to the market, I sought Samkan’s cart, even though there were many other sellers. He became my friend, as I could even borrow vegetables and pay for them later. The more I came to the market, the more I discovered that Samkan was not only a seller of vegetables, but a giver of thoughts and wisdom as well. Sometimes he spoke to me about the mall, society, liberty, the human being, dignity, and many other philosophical matters. Going to see him, not only to buy vegetables, became my habit.

One Sunday morning, at 6 am, the time I often went to the market, I did not find Samkan in his usual place. I thought I was in the wrong place, so I looked for him in other places and in every single corner in the market. I was running and searching. Nothing found. I stayed there waiting for him, hoping that he might show up; yet I was pretty sure that something had happened, as Samkan was always there before dawn. At 7 am, he did not come; at 9 am, he did not come, and eventually I left at 11 am. Samkan had disappeared.

I did not know how to find him. I never asked him if he had a house, a wife, or children. I missed him, and became very depressed and sad. I had to buy vegetables from other sellers. I stopped going to the market every day.

Perhaps Samkan died, as he could not stay home without coming to the mall. That was a piece of evidence I used to confirm that he was not alive anymore. I remembered only his wrinkles and kindness. I wept silently. My wise friend left the mall forever, as I sometimes went and looked for him but no result as always.

After few weeks, I was wandering in the mall, and suddenly overheard an old man say, “Samkan had recovered well, but he decided not to come to the market anymore.”

I was so amazed, and asked him, “Please, do you know Samkan? Do you know where he is? Please, tell me what happened to him!” I asked many questions; but all that mattered to me was the whereabouts of Samkan.

The old man told me that Samkan would never come back to the market, as he was bitten by some stray dogs the day he disappeared. Samkan chose to go back to do what he was doing before coming to the mall.

I asked him again, “please what was he doing and where could I find him?

“He is selling books and magazines in the Med of the fifth street,” he answered.

I rushed immediately to the place the old man told me, and arrived at 5 p.m. No sooner had I arrived than I saw my friend carrying few books in his hands and talking to some young people. I called him, “Hey my friend, Samkan, I was looking for you in the market since you disappeared!” I hugged him, and said an old man told me that you were bitten by some stray dogs. “Are you ok now?” I asked

“Yes, some stray dogs bit me that morning, and some sellers in the market took me to hospital. I could not come back to the market, my friend. It is not safe for me, I could bear the sunny days, the rainy ones, and all other conditions, but not stray dogs. Now I sell books, as I have started reading and writing again.”

“Yes, writing. I’m fond of writing. It is the only means through which I speak to the people who live far away from me, those who are superior and have no time to come to the market or the streets, and it is the only means I use to speak to other generations coming after us. I need to jot down all the sorrows and draw all the hard curly roads I have taken, for those who will come after us,” he answered.

“Hmm, I was a good student at the university, and worked at the market at the same time,” he added.

I learned that Samkan had been to school and to university as well. He studied philosophy, as he was knowledgeable in Arabic literature. I could not believe that he was an educated and literate person, even as he worked as a seller in the market, but I knew that he was a wise man from the way he was speaking.

After a few days, I entered a library to look for some books to read. I was inspired by my friend, and realized I needed to read and write as well. I also had ideas to transmit to others, so that they would not relive the same hard experiences I had gone through.

While wandering among the many books in the library, I came across several novels written by my friend, Samkan. They made my day!

I found that Samkan published his first series of short stories in 2008; it was titled “Dogs of the Market”. He also published several editions of the first cultural magazine in Morocco between 2005 and 2006, which was under the title of “Cultural Visions”. He published his first novel in 2012, titled “Adam Who Sees”.

I bought his series of short stories “Dogs of the Market”, and rushed immediately to the street, where my friend sold books and magazines, but I could not find him again. Samkan had disappeared!

However, at that time another bookseller informed me that Samkan had applied for a teaching position. He had become a teacher trainee for the academic year 2015/2016 at the Regional Center of the Education and Training in Marrakech. The vegetable seller is now  a teacher of Philosophy.