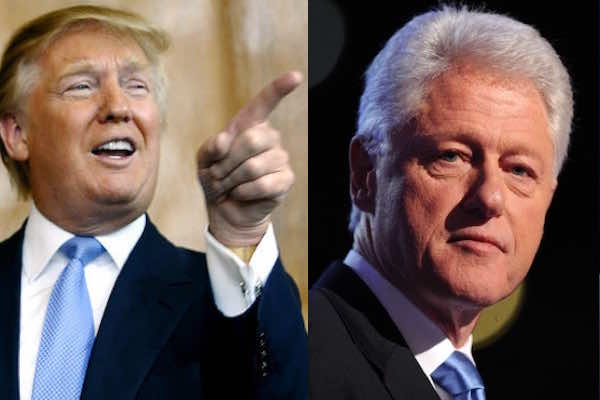 Washington, D.C. – With the 2016 presidential elections looming not too far, and the primaries, seemingly, decided before the actual voting even started, the likely primary winning candidates have begun to posture and position themselves for the general election. Donald Trump, the likely GOP nominee, has engaged in pre-emptive strikes going after one of the secret weapons of Hilary Clinton, the Democrats’ likely nominee: Her husband and former President Bill Clinton.

Trump is using a variety of weapons in his arsenal to carry out his attacks, including accusing the former President of being “seedy” referring to the sex scandals that at times dominated the Clinton’s presidency from the infamous Monica Lewinsky affair to that of Paula Jones among others. Trump said that in a phone interview with CNN in which he also added that Bill Clinton is “one of the great woman abusers of all time.” To make sure that Hilary is not exonerated from any of this, he sees her as complicit and called her the “enabler” in all this during the same interview.

It did not get passed Trump and his team that Bill Clinton was not successful in getting Hilary nominated for the 2008 general elections. Harsh as that is, it is true. The former President was told back then that two Clintons could not beat one Obama, something Trump is hoping to repeat.

With the claim President Obama beat two Clintons, one a former President and one a standing Senator at the time, is true, Trump’s equating his 2016 run to that of President Obama’s in 2008 by implication is a huge miscalculation and conclusion. Trump and Obama as campaigners could not have been anymore more polar opposites as far as their campaign messages are concerned.

Obama’s 2008 run was an exception and not the rule. He succeeded in the manner he did, because his message was full of optimism and hope. People felt united. Everyone was chanting “Yes We Can.” There was not a question about the unity of the Democratic Party. Both Clintons endorsed Obama at the time. Furthermore, Bill Clinton spoke at the 2012 Democratic National Convention in support of his wife’s former political rival at one point.

Trump on the other hand, has gone on a charade antagonizing various minority groups from women to Hispanics, to Muslims.

About women, he was told in a debate that he “called women you don’t like fat pigs, dogs, snobs and disgusting animals,” something he does not utterly or categorically deny. With respect to Hispanics, he said that Latino immigrants “are bringing crime. They’re rapists.” In his attempt to keep an escape route open, he added: “And some, I assume are good people.” As far as Muslims are concerned, he wanted a “total and complete shutdown of Muslims entering the United States.”

Trump is sorely mistaken if he thinks that former President Bill Clinton’s involvement in these elections will be similar to that in 2008 in terms of outcome. President Obama, the nominee back then, rallied the voters and the country behind him as one unit during the general elections. Obama is a uniter, Trump a divider, including of his own GOP Party.

Given the status quo, while Obama led and people followed him during his 2008 campaign, Trump, if he gets the GOP nomination, should look forward to herding cats if he is to rally a diverse category of voters behind him.