Cairo  -  Delegate minister for foreign affairs and cooperation, Mbarka Bouaida, expressed on Sunday in Cairo, Morocco's strong condemnation of attacks on Saudi Arabia's embassy in Tehran and its consulate in Mashhad, and held the Iranian government responsible of violations of international conventions relating to the protection of diplomatic missions. 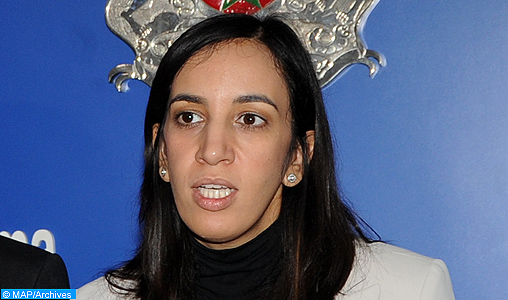 Cairo  –  Delegate minister for foreign affairs and cooperation, Mbarka Bouaida, expressed on Sunday in Cairo, Morocco’s strong condemnation of attacks on Saudi Arabia’s embassy in Tehran and its consulate in Mashhad, and held the Iranian government responsible of violations of international conventions relating to the protection of diplomatic missions.

Speaking during an extraordinary meeting of the Arab League foreign affairs ministerial council, Bouaida said Morocco rejects any sectarian or communal rhetoric logic that is used as a pretext “to interfere in the internal affairs of countries.”

The minister stressed that regarding the current regional and international political situation, all parties should avoid any escalation and not fall in the trap of communal and sectarian conflicts, adding that it is necessary to cease interference in Arab countries’ internal affairs and to respect good neighborly relations in order to ensure peaceful coexistence between them.

She also expressed Morocco’s conviction that Saudi Arabia, which has always defended Arab and Islamic causes, will continue to face the great challenges in the region, thanks to its determination and wisdom and to its commitment to the unity of ranks and the protection of the Ummah’s interests.

The extraordinary meeting of Arab League foreign ministers was conveyed at the request of Saudi Arabia, whose diplomatic missions in Iran were attacked.