Washington D.C. - Today marks the first day of year 2966, according to the Amazigh calendar. 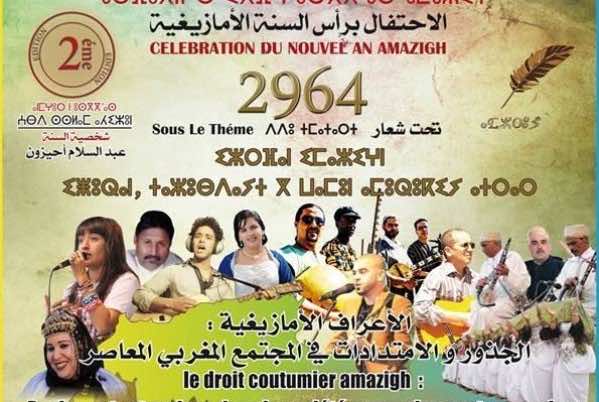 By
Iliana Hagenah
-
Iliana Hagenah is a journalist and student at George Washington University majoring in International Affairs and Music.
Jan 11, 2016

Washington D.C. – Today marks the first day of year 2966, according to the Amazigh calendar.

To gain recognition for this New Year, Amazigh have been orchestrating inclusive cultural festivities on the streets of Rabat today.

Although anthropologists say it is difficult to confirm the historical roots of the Amazigh New Year, known as Yennayer, the holiday’s roots have been linked back to 950 BC.

The New Year began as a celebration after Amazigh (Berber) King Chachnaq won the war against the Pharaohs, defeating Ramses III. Ever since, his descendants celebrate this historic victory annually.

But for the past few years, Amazigh have been attempting to claim a new victory with this holiday. In recent years, they have succeeded in making their Amazigh language the official language of the state along with Arabic in the 2011 Constitution. Now, they pushing for more recognition, trying to make their New Year a national public holiday.

Morocco has two New Years marked as public holidays. These include January 1, according to the Gregorian calendar and the first day of the Islamic calendar, which changes every year depending on the moon.

Most Moroccan citizens celebrate the Gregorian New Year, with media coverage focusing on January 1 festivities. Meanwhile, the Islamic calendar falls under the radar.

The Amazigh New Year has fallen even further, being relegated as a cultural observation, although it is still an integral part of Berber identity.

Morocco adopted the Gregorian calendar for civil purposes when it was under French rule (1912-1956).

After using the Berber agricultural calendar and the Julian calendar under the Roman Empire, Morocco adopted the Muslim New Year in the late seventh century with the conversion of Amazigh to Islam.

“We want the Amazigh New Year to be considered a public holiday, following the example of other calendars,” activist Meriem Demnati told Africa News.

Amazigh saw many aspects of their once dynastic culture reduced to folklore.

To many Amazigh, the New Year marks the reaffirmation of some important aspects of agrarian society.

During their celebrations, Amazigh sing and dance “Ahwach” and “Ahidous” dances, which have remained part of the Amazigh tradition for centuries.

The word “Ahouach” means group dances in Amazigh. In the dance, Amazigh people line up close to one another and move in conjoint rhythms, occasionally clapping together to the beat. As the pace of the music accelerates, dancers begin to move slowly with a slight swaying shoulders and hips in a circle.

Each dance relates to one another with improvisations and individual and group singing through alternating rhythms. These dances highlight a sense of fellowship along with individual poetic expression.

There is currently no proposal to the King to formalize the event as an official holiday. The head of the Royal Institute of Amazigh Culture (IRCAM) says that in the absence of any proposal “there is no official position on the subject” and activists must push on with their campaign.

Last year, the youth wing of Amazigh Network for Citizenship (Azetta) launched a petition for the holiday. There has been no government response ever since.