New York - Fátima Taleb, a Moroccan-Spanish councilor has recently officiated the wedding of two men last Saturday in the town of Badalona, in Spain. 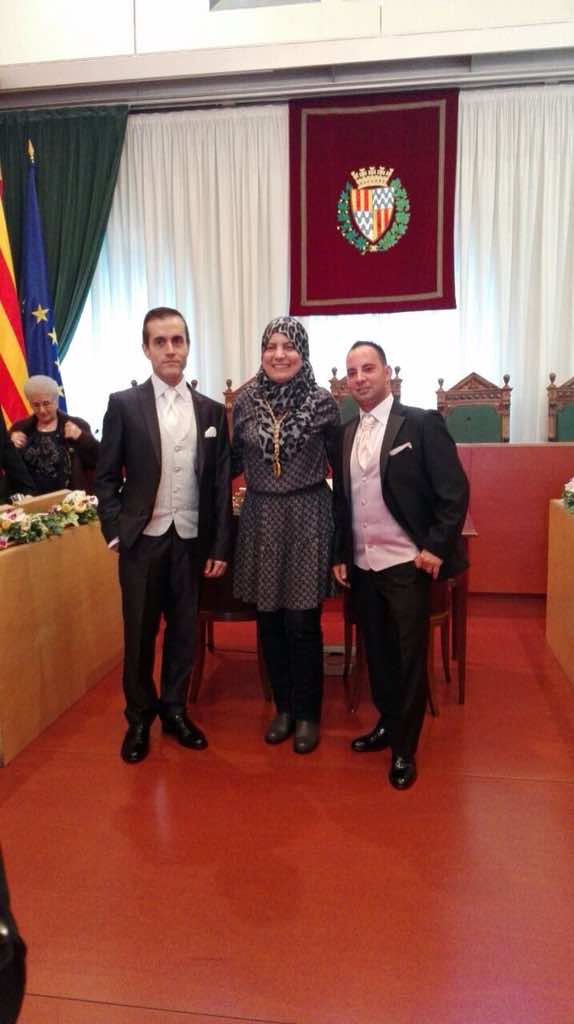 By
Karla Dieseldorff
-
Karla is an award-winning actress and producer.
Jan 12, 2016
Spread the love

New York – Fátima Taleb, a Moroccan-Spanish councilor has recently officiated the wedding of two men last Saturday in the town of Badalona, in Spain.

An image of Taleb dressed in hijab, next to the newlywed couple at the city town hall has made the rounds on social media networks stirring outrage and receiving all kinds of comments.

Fátima Taleb, 39, is the first ever Muslim woman to be elected councilor in Guanyem Badalona, in eastern Catalonia, Spain, according to Spanish newspaper La Vanguardia.

Some Twitter users have described the wedding as an “incredible example” of the “spirit of tolerance,” democracy and respect, while others have criticized Taleb’s actions as a “disgrace for a Muslim.”

The Moroccan born Muslim tried to allegedly prove that one can be a follower of Islam and at the same time marrying two men and sharing the image worldwide.

Taleb was born in Morocco and arrived in Badalona at the age of 22. She holds a degree in Modern Literature from Morocco.

According to the same source, her political career in Spain started when she began volunteering in municipal initiatives in favor of the social inclusion of immigrants.

Fátima’s ideals of unity and tolerance for everyone were a key factor in her election, putting an end to former Badalona Mayor Xavier García Albiol’s policies.

“We need to breathe clean air, without racism, without xenophobia and discrimination, we need a diverse society that includes all groups without exception”, she argued in her candidature.

The 39-year-old Muslim who was elected councilor on June 13, 2015 touched on the importance of having an open-mind and debunking myths.

“If you do not know your neighbor, you believe all the rumors and stereotypes that circulate about it. If you approach them, you talk to them, you know their culture, their thinking and their religion, you can break down barriers,” Taleb told Spain’s El País.

According to several Spanish media sources, the officiation of the same-sex marriage in Badalona are a symbol of the “drastic” changes that are taking place in this Spanish region since May 2015.