Taroudant - The aunt of drowned Syrian refugee boy Aylan Kurdi said that the controversial new cartoon from Charlie Hebdo is "disgusting," and dishonoring the innocent boy. 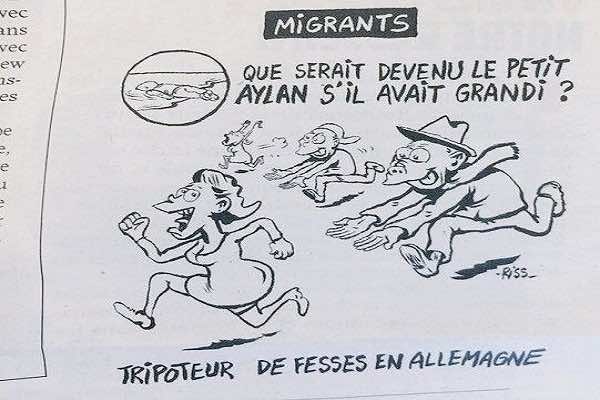 Taroudant – The aunt of drowned Syrian refugee boy Aylan Kurdi said that the controversial new cartoon from Charlie Hebdo is “disgusting,” and dishonoring the innocent boy.

Dishonouring my innocent 2years old nephew Alan Kurdi? That disgusting, but we have to ignore it, https://t.co/LF07ShfMtq

“I hope people respect our family’s pain. It’s a big loss to us. We’re not the same anymore after this tragedy. We’re trying to forget a little bit and move on with our life. But to hurt us again, it’s not fair,” said Tima Kurdi from her new home in Port Coquitlam, in Canada.

The tasteless cartoon of the Syrian boy landed the French magazine in hot water, with a wave of criticism from social media users.

More vicious racism from Charlie hebdo this week i see

@chrisapplegate @rcp123456 All of the people who work at Charlie Hebdo are some of the most bigoted & racist people in the world, actually.

The infamous photo of the drowned Syrian boy, which made global headlines last September 2, was exploited for the second time by the magazine to cast its “racist” and “xenophobic” satire about the cases of sexual harassment on women, which took place on New Year’s Eve in the streets of Cologne, Germany.

Under the headline “Migrants,” the cartoon shows two lascivious pig-like men with their tongues hanging out chasing two frightened women.

At the top, the cartoon shows the image of the three-year-old Syrian boy laying face down dead in the sand. The magazine wrote “What would little Aylan have grown up to be?” with an answer at the bottom reading “Ass groper in Germany.”