Asuncion– Morocco and Paraguay expressed, here Thursday, their resolve to give new impetus to their friendly and cooperation ties with a view to further diversify them. 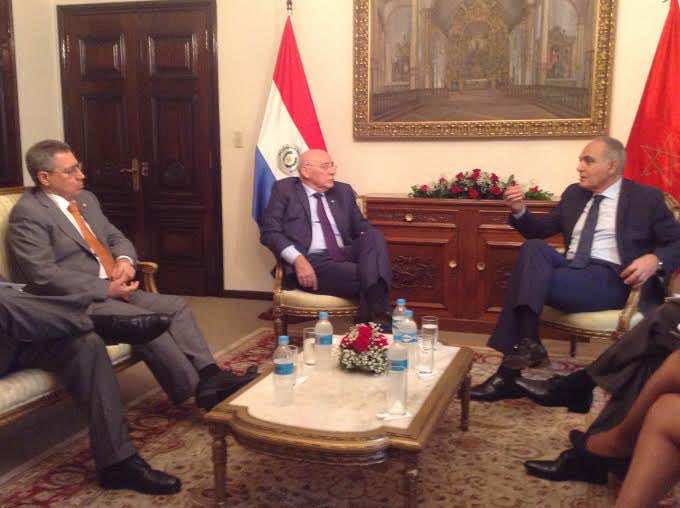 Asuncion– Morocco and Paraguay expressed, here Thursday, their resolve to give new impetus to their friendly and cooperation ties with a view to further diversify them.

In a joint statement on the occasion of the visit of Morocco’s Foreign minister Salaheddine Mezouar to Paraguay, the two countries praised the convergence of their policies, notably in the fields of democracy, social and economic reforms, eradicating poverty, and the respect of human rights.

Mezouar and his Paraguayan peer, Eladio Loizaga, also highlighted the importance of further boosting their trade cooperation, and agreed to hold a business forum in a near future.

On this occasion, the Paraguayan Minister expressed his gratitude to King Mohammed VI for the “highly valued” gesture of providing a US$ 1 million grant to respond to the urgent humanitarian needs of the Paraguayan people following floods that hit his country, the statement added.

During their talks the two foreign ministers expressed their commitment in favor of South-South cooperation, notably within the framework of South American-Arab States Summit and South American-Africa Summit, the statement noted.

Mezouar discussed with his Paraguayan peer the latest developments of the Sahara issue in the light of the relevant UN Security Council resolutions, and highlighted the new development model for the Southern provinces of Morocco.

In this regard, Loizaga reiterated his country’s official decision to withdraw its recognition of the so-called Sahrawi republic in January 2014, calling for a political solution which respects Morocco’s sovereignty and territorial integrity.

During his official visit to Asuncion, Mezouar was received by the President of the Republic, Horacio Cartes, who expressed his country’s will to build stronger partnership with Morocco. Mezouar also met with a number of Paraguayan MPs and senior officials.