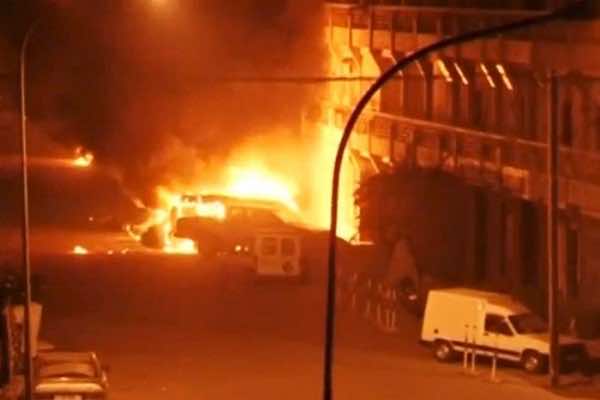 By
Larbi Arbaoui
-
Larbi is a freelance writer and assistant editor at Morocco World News.
Jan 16, 2016
Spread the love

Burkina Faso Foreign Minister Alpha Barry told CNN that “preliminary reports indicate that more than 20 people were killed,” in an attack for which al Qaeda in the Islamic Maghreb (AQIM) claimed responsibility.

The same source quoted the French Interior Ministry as saying that 126 people have been freed by French and Burkinabe forces, in a coordinated successful operation.

Simon Compaore, the country’s security minister, told Agence France-Presse AFP that the assault is over. He pointed out that about “twenty-two people had been confirmed dead,” adding that the toll could rise further as security forces continue their search for casualties.

“We don’t yet have a total tally of the dead. The Burkinabe forces are still combing the hotel,” the minister said.

Militant gunmen from al-Qaeda in the Islamic Maghreb (AQIM) stormed on Friday night a hotel in the capital city of Burkina Faso.

Survivors described horrific scenes as the gunmen were burning cars outside the hotel and firing in the air and at everyone on sight.

“We could hear them talking and they were walking around and kept shooting at people that seemed alive,” survivor Yannick Sawadogo was quoted by CNN a saying.

“Everyone was panicked and was laying down on the floor. There was blood everywhere, they were shooting at people at point blank,” he added.

The attack comes a few months after Burkina Faso put an end to nearly three decades of autocratic rule through an historic presidential election last November.