Taroudant - Jordan’s Queen Rania has responded to a controversial cartoon by French newspaper Charlie Hebdo about the drowned Syrian toddler in a similar vein, by a cartoon depicting the dreams and objectives of all Syrian refugees. 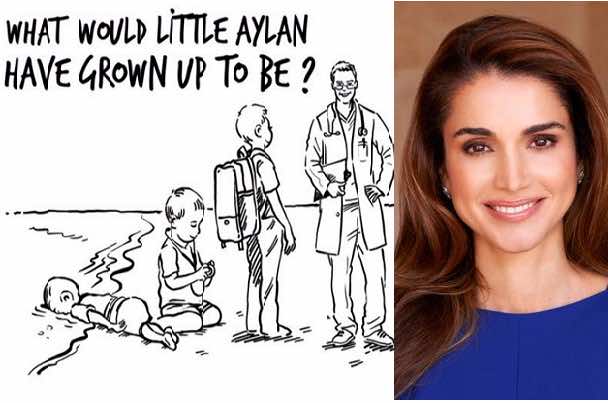 By
Larbi Arbaoui
-
Larbi is a freelance writer and assistant editor at Morocco World News.
Jan 17, 2016
Spread the love

Taroudant – Jordan’s Queen Rania has responded to a controversial cartoon by French newspaper Charlie Hebdo about the drowned Syrian toddler in a similar vein, by a cartoon depicting the dreams and objectives of all Syrian refugees.

After publishing a cartoon depicting two pig-like men chasing a woman and saying Aylan would have grown up into a “groper in Germany,” the satirical French magazine faced a wave of harsh criticism from social media users.

In response to the weekly’s “disrespectful” and “xenophobic” cartoons, Queen Rania of Jordan has posted a cartoon on Facebook and Twitter, drawn by Jordan’s Osama Hajjaj depicting the life of a little boy first lying face down on the beach alongside a child happily playing, then as a student, and finally as doctor.

At the top was the same question as on Charlie Hebdo’s cartoon: “What would little Aylan have grown up to be?”

The Queen shared the cartoon with her 4.5 million followers on Twitter, with a statement that reads “Aylan could’ve been a doctor, a teacher, a loving parent. . . .”

Aylan could’ve been a doctor, a teacher, a loving parent… Thanks @osamacartoons for sketching my thoughts pic.twitter.com/M2z4Z3mJe0

The queen thanked Osama Hajjaj for sketching her thoughts. Queen Rania’s cartoon has been highly acclaimed by online users who applauded the “classy” way she has protested the mocking cartoons of the French magazine.

@nagashiwa @QueenRania @osamacartoons What a classy reply to a low level input. CH has definitely lost its flair

The infamous photo of the drowned Syrian boy, which made global headlines last September 2, was used by the satirical magazine several times to publish its “racist” and “xenophobic” satire.

Irrespective of the feelings of his family and the thousands of refugees the photo represents, the magazine has exploited the death of the boy that shocked the whole world to attack and blame refugees for the cases of sexual harassment of women, which took place on New Year’s Eve in the streets of Cologne, Germany.