New York - Abdullah Kurdi, the surviving father of Aylan Kurdi, the two-year-old Syrian refugee who drowned and washed up on a Turkish beach, cried when he saw the Charlie Hebdo cartoon mocking his child. 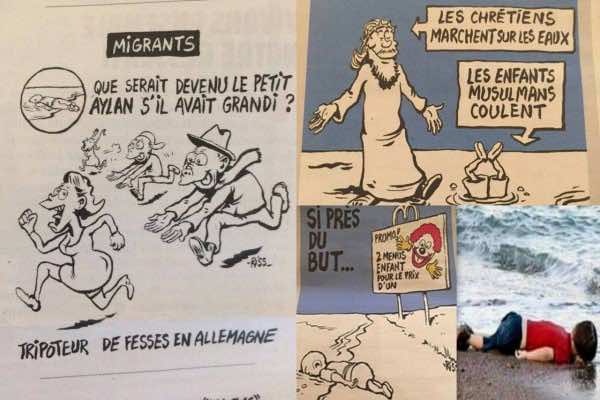 By
Karla Dieseldorff
-
Karla is an award-winning actress and producer.
Jan 17, 2016
Spread the love

New York – Abdullah Kurdi, the surviving father of Aylan Kurdi, the two-year-old Syrian refugee who drowned and washed up on a Turkish beach, cried when he saw the Charlie Hebdo cartoon mocking his child.

“When I saw the picture, I cried,” Abdullah Kurdi told AFP by phone, adding that “My family is still in shock.”

Kurdi sent a written statement to the same source describing the cartoon of the French satirical magazine as “inhuman and immoral.”

The outraged father compared the actions of the French publication as those of “war criminals and terrorists” that have been the cause of thousands of deaths and displacement of refugees.

Last Wednesday, Charlie Hebdo stirred controversy by publishing a “tasteless” cartoon mocking Aylan, suggesting he would have become a sex offender had he not drowned at sea.

Signed by cartoonist Riss, the drawing asked the question, “What would little Aylan have grown up to be?” The “Migrants” titled cartoon answered, an “ass groper in Germany,” portraying him with a pig’s face running after a woman to sexually molest her.

The use of Aylan Kurdi’s image linked his refugee status and his Muslim faith with the alleged asylum-seeking attackers who carried out coordinated sexual assaults in Cologne, Germany last December 31.

The cartoon has offended Aylan Kurdi’s family, as well as thousands of social media users who have condemned the exploitation of his image by the French magazine.

“I hope people respect our family’s pain. It’s a big loss to us. We’re not the same anymore after this tragedy. We’re trying to forget a little bit and move on with our life. But to hurt us again, it’s not fair,” Tima Kurdi, Aylan’s aunt tweeted from her new home in Canada.

The French magazine is now facing harsh criticism and being accused of racism, hatred and bigotry.

“There’s a thin line between #freedomofspeech and racial/hate speech, Charlie Hebdo knows no bounds of decency #closethemdown,” a Twitter user said in response to the cartoon on Wednesday.

Queen Rania of Jordan responded to Charlie Hebdo’s mockery of Aylan Kurdi with a cartoon she posted on social media on Sunday.

The drawing asked the same question, “What would little Aylan have grown up to be?” Yet, in the Queen’s cartoon the answer was, “Aylan could’ve been a doctor, a teacher, a loving parent….”

Osama’s cartoon showed the drowned body of little Aylan on the beach, which has become the international symbol of the Syrian refugee crisis, next to a child playing, who turned into a student, and eventually a doctor.

Queen Rania has received thousands of comments praising her “classy” response to Charlie Hebdo’s “xenophobic” mockery of the unfortunate death of an innocent child.