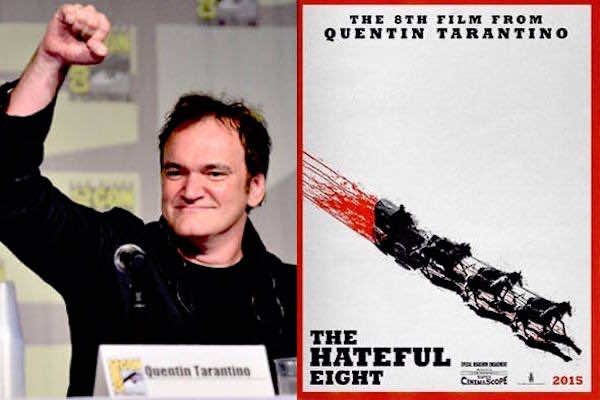 Rabat – Released in 2015, The Hateful Eight is a film written and directed by Quentin Tarantino and starring an ensemble cast that consists of Samuel L. Jackson, Kurt Russell, Tim Roth, Michael Madsen, and Walter Goggins among other talented actors. The movie serves as Tarantino’s eighth feature film, and once released it was received highly positive reviews from both critics and audiences.

According to Tarantino, the initial idea of the movie was stimulated by a detail he noticed while watching his favorite shows, where it was difficult to tell whether the guest stars of certain episodes are the protagonists or the antagonists, and the only way to find out was to sit through the whole episode. He also noted that in those shows, when they invite guest stars, the story is always about them, and it’s never about the main characters.

The whole concept, however, inspired him to write a draft in which he took eight of those characters, putting them all in a room together and deliberately deprived the story-line of a real good guy who represents the moral center and whom we usually see in almost all movies, in order to see how far the plot can extend. This technique, as far as the creative process is concerned, gave the script not only solidity, but also an amazing implicit originality.

Originally, Tarantino didn’t bother mentioning all the details of the movie in the first draft of the script. According to him, this would reveal things after sending copies to a few of his friends, given the fact that he had already planned to write a second and even a third script, in which he intended to elaborate on the details by adding new dimensions to the characters, as well as more depth to the subplots.

Eventually, he ended up writing three different drafts with different characteristics and endings, and the first two were used to build the final solid one that made it directly to the screen. It is well known that, besides his unique and beyond-expectations directorial style, the power of Quentin Tarantino’s films lies in the distinctive storytelling techniques he uses, which are part and parcel of the original writing process.

Before we even get to the creative directorial effort by Tarantino, it is important to highlight the uniqueness of the characters he created for the movie. The strength of The Hateful Eight is its mysteriousness, darkness, and subtlety of the characters, who are multi-layered and who enjoy a twisted sense of humor, which is basically Tarantino’s humor illustrated through his own characters. You never know what to expect from such unusual characters, especially when they are supposed to be suspicious, paranoid, violent, funny, and hateful in the middle of two blizzards – one in the room and the other outside, keeping them trapped together in the room as if they were victimized prisoners.

Hence, we realize that Quentin Tarantino’s philosophy in film-making is that a movie should affect the viewers in a way that makes them feel reality in a world of fiction. This specific mentality is what makes his movies in general and The Hateful Eight in particular appealing and spectacular in terms of special effects and the use of realistic violence, if we take into account that Tarantino is one of the directors who prefer the use of blood packs and manual tricks rather than CGI.

Visually, The Hateful Eight is a beautiful film to watch. The combination of the lighting, the colors, the images, and the realistic acts of violence is remarkable – I mean, come on! We’re talking about a Tarantino movie here. – The graphic content doesn’t differ that much from the stylized violence of Kill Bill, for example, but it is shocking this time because it’s a key element that reveals all the missing links of the puzzle, in the sense that right before or after each brutal scene, a new dimension is inserted and a new truth is revealed to both the characters and the audience. For that reason, it is impossible to separate the crucial small details in many scenes that not everyone can notice easily, and the visual violence, which is highly stylized and beautifully done, aesthetically speaking.

The use of the flashback in the movie is one of the many elements Quentin Tarantino uses to tell his stories. Only this time, the smartly-placed alternative angles of the same scenes from different perspectives not only serve the storytelling process, but also invite the audience to the chaotic room and force them to be part of the confusing plot that gets more and more suspenseful before the final chapter.

As for the acting, the delivery of the actors is sharp and precise enough that the long dialogues sound far from boring. In fact, there are several scenes that are so smartly written, highly suspenseful, and brilliantly delivered that they seem too short, despite their unusual length. In addition, the variety of the talented cast completely erases any form of monotony; too many main characters and each one of them stands on their own as far as the acting is concerned.

Ultimately, The Hateful Eight is written and directed by a director and screenwriter who effortlessly exceeds himself once again with new material that can only be described as graphic, smart, funny, and puzzling.