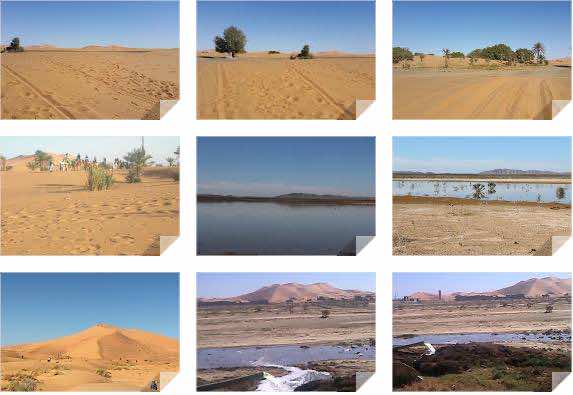 Merzouga, a beautiful city in the South East of Morocco surrounded by an unimaginably beautiful landscape that attracts thousands of visitors from around the world every year, is deteriorating before it residents’ eyes as a result of environmental pollution and other man-made disasters.

Merzouga has long been considered one of the most amazing places for tourists from all over the world, known for its golden sand dunes, its wonderful sunsets and sunrises, and a very beautiful lake. But the village faces many problems, especially threats to its amazing natural features.

One of the threats is refuse. Many people, villagers as well as visitors, throw trash everywhere, especially in the vast sand dunes and on the village’s heavenly earth. They picnic in the desert, and do not think twice about leaving their trash there after they finish. This is mainly due to the idea that a place that belongs to everyone does not, in fact, belong to anyone.

What makes things worse is that there are no drains and no sewage treatment in all the villages belonging to the rural commune of Taous, where Merzouga is the principal village. Because of this, people suffer greatly from encroachment of their sewage and having nowhere to dispose of it. In order to solve this problem, they dig large holes in the ground and cover them with cement. Once they are full, the villagers must uncover them and empty them. This is not only expensive, but it pollutes the air whenever one of the holes is opened.

When it comes to hotels and hostels, the situation is aggravated because not all of them dig holes to dispose of their sewage, or if they do they pour, some of them use water (especially that coming out of the kitchens or the bathrooms) outside the hostels, which creates muddy and stinky spaces.

Quad bikes and four-wheel drive adventures are two important activities that have their fans in the desert of Merzouga and its surroundings, but these activities also can harm the environment and the nature of this magnificent landscape. People do not generally think much about the harm they do to the environment by such activities. Because they love these activities, they do not consider them to be polluting the environment. Yet, the vehicles destroy the beauty of the dunes and even kill some of the desert bushes and plants.

Furthermore, many people would just like to spend an afternoon or even a morning in the quiet calmness of the desert to feel the eternal silence that usually characterizes the desert. But when young people drive around on these noisy vehicles, it becomes impossible to have these moments with one’s friends and family, or even with one’s self.

The erosion of the natural beauty of Merzouga is alarming and calls for the mobilization of people to keep the village clean. That’s why now there has been a wakeup call from the youth of the villages in the region of Merzouga to take action.

A few weeks ago, nearly all the young people in the region of Mezouga-Taous gathered with the help of a newly created association, All For The Region, and organized a campaign to clean all the trash that is spread all over the community of villages spread over more than 41 km.

The majority of the people in the Taous commune participated in that campaign and they did an amazing job. They collected nearly 3000 trash bags containing refuse, including wine bottles and cans. Those who couldn’t help with trash gathering helped with food preparation and other things such as providing money or other provisions they could help with. They also provided a new parking garage because they old one was situated near the lake, so it was affecting one of the most beautiful places in the region.

Now, things are beginning to look quite good again for Merzouga and its surrounding villages. It has become clean again, but the challenge persists. Everyone should collaborate to prevent it.

An important thing to do is create an action plan to provide the village with an effective sewage system, as well as a strategy to gather the trash and sensitize the people about this phenomenon. This is everybody’s duty, whether they are administrative staff at the Taous rural commune or the civil activists in the region and the people in general.

Merzouga – with all its natural resources, its touristic activities, and its position at the national and international level- should never face such disasters. It has all the resources it takes to be a beautiful village fit to attract more people in the future. This is a call for whoever it may concern to take action and save this heaven.