Taroudant - Morocco Premier Events’ artisans showroom, the first such place in the United States devoted to Moroccan history, crafts and culture, opened one year ago in Northern Virginia just outside Washington, D.C., in a brand new modern space to provide a window on Morocco’s diversity and culture by showcasing Moroccan handicrafts and arts. 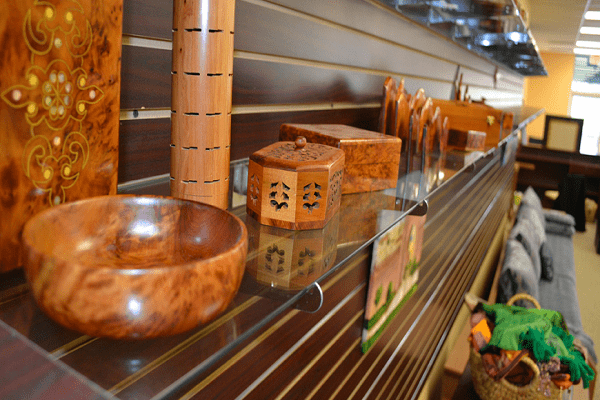 By
Larbi Arbaoui
-
Larbi is a freelance writer and assistant editor at Morocco World News.
Jan 24, 2016

Taroudant – Morocco Premier Events’ artisans showroom, the first such place in the United States devoted to Moroccan history, crafts and culture, opened one year ago in Northern Virginia just outside Washington, D.C., in a brand new modern space to provide a window on Morocco’s diversity and culture by showcasing Moroccan handicrafts and arts.

The official launch of the showroom by “La Maison de l’Artisan” in partnership with Morocco’s Ministry of Handicrafts, Social Economy and Solidarity, coincided with a special “Morocco Days” exhibition sponsored by the City of Alexandria, Virginia) in April, 2015. The showroom is part of Morocco’s “Vision 2015” plan to promote Morocco’s brand and image in the U.S. and elsewhere.

The showroom also features items combining both traditional and modern styles, ranging from painting and wall decorations to traditional costumes and tea cups.

The initiative pays tribute to the genius and the dexterity of Moroccan artisans who have preserved the traditional heritage of Morocco, a country proud of its centuries-old history and civilization.

The exhibition is also home to a library of books on history, religion, and the literature of Morocco, which reflect the diverse splendor of the culture of the Kingdom.

Hassan Samhrouni, CEO and founder of Morocco Premier Events, said that the showroom has made a significant contribution to making the American public aware of the rich cultural and traditional heritage of the Kingdom, according to MAP.

He added that a number of meetings and exhibitions, notably with U.S. designers, were were held last year. The showroom has hosted groups of students for tea and educational lectures and videos.

Thanks to the success of the showroom, Morocco Premier Events has been able to exhibit Moroccan craftsmanship in several other centers, including the prestigious Washington Design Center, said Samhrouni.

It has also established a relationship with the George Washington Textile Museum University.

The project is not just about showcasing Moroccan culture and tradition but also for enhancing U.S.-Morocco business. Samhrouni stressed the need for Moroccan products and producers to meet the requirements of the U.S. market in order to compete with products from other countries, such as China.

“After some twenty five years in the U.S., I am very excited to bring the diverse culture of Morocco in such a tangible way to the American people,” Samhrouni told MWN.

“Just as the U.S. is a country of immigrants of diverse backgrounds, Morocco has been a crossroads of many peoples, cultures, and religions — living together for thousands of years.

I am grateful to have had the support to bring this project to life in this great country of America.

Morocco Premier Events, in its continuing efforts to open up Morocco more to the U.S. market, will take part in an upcoming exhibition entitled “New York Now” to be held January 30 to February 3 in New York City. More information is available at.