Rabat - A Video of  YouTuber and filmmaker Casey Neistat snowboarding through the snowy streets of New York on Sunday is going viral on social media. 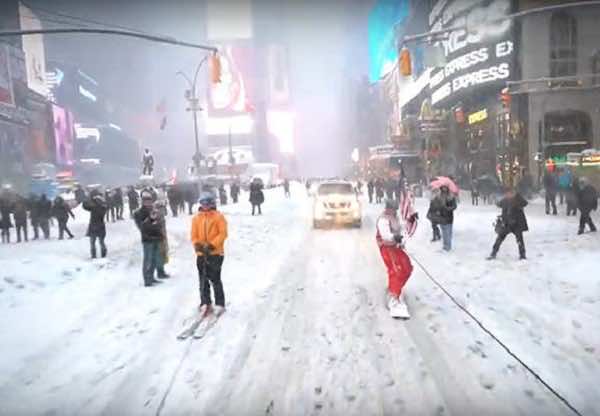 By
Larbi Arbaoui
-
Larbi is a freelance writer and assistant editor at Morocco World News.
Jan 25, 2016
Spread the love

Rabat – A Video of  YouTuber and filmmaker Casey Neistat snowboarding through the snowy streets of New York on Sunday is going viral on social media.

Despite the New York Police Department threat to arrest anyone driving during the blizzard, Neistat was crazy enough to challenge the ban and took to the streets snowboarding.

The video, uploaded on Sunday, has already garnered more than 5 million views on Neistat’s YouTube channel.

Neistat took to the snow-filled streets of NYC in a spectacular performance, which seemed to please and inspired others to do the same.

Neistat told the New York Times that he has snowboarded all over the world, but snowboarding on the urban streets of NY was the best experience he has ever had.

“When you’re out West you’ve got trees to avoid and you’ve got rocks to jump off,” he said.

“Here, you have snow plows to avoid, snowbanks and sports cars to jump off,” he told the same source.

Neistat was zipping around the city in a red outfit and sunglasses, carrying an American flag, while pedestrians waved at him, before the police stopped him.