Rabat - A shocking video posted on YouTube on Sunday shows a man violently beating up his wife on a narrow pedestrian street in Tangier, in northern Morocco. 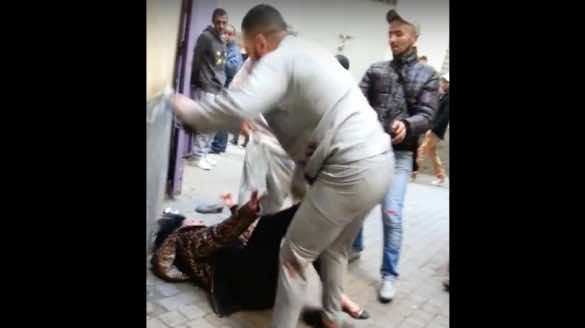 Rabat – A shocking video posted on YouTube on Sunday shows a man violently beating up his wife on a narrow pedestrian street in Tangier, in northern Morocco.

Taken by a passerby, the violent video lasting nearly two minutes shows a man viciously beating, dragging, punching and kicking a woman who seems badly injured and fell on the floor screaming in fear.

The victim’s screams for help are deafening, while the perpetrator keeps on abusing her. The man’s clothes are stained with the woman’s blood, which gives an idea on the intensity of his violence.

Several passersby observe the gruesome scene and show no compassion for the woman. Instead the keep on their business almost ignoring the violent attack.

One man tries to stop the attacker from beating his wife, but his attempts to stop the enraged husband are not strong enough, while everyone else walking the streets does not react.

Towards the end of the video, the offender kicks his wife one last time in the stomach and steps on her face making her bleed even more.

The kick on her face seemed to have left her unconscious for a few moments. Apparently, the mad man seems to have had enough and sits next to his wife on the floor, while she moans and cries.

The scene took place in Tangier, in the Bni Idir neighborhood of the old medina, according to sources cited by Le360 news website.

The man was arrested and will be brought to justice awaiting prosecution. The victim filed a complaint against him, which she later withdrew, according to the same source