Casablanca  -  King Mohammed VI launched, on Monday in the prefecture of Casablanca-Anfa, a project to develop a smart video surveillance system to guarantee security of public spaces and promote good traffic control. 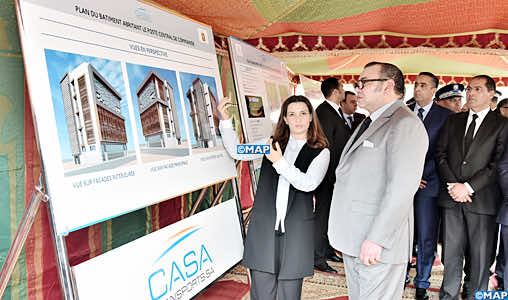 Casablanca  –  King Mohammed VI launched, on Monday in the prefecture of Casablanca-Anfa, a project to develop a smart video surveillance system to guarantee security of public spaces and promote good traffic control.

The 460-million-dirham project is the first of its kind in the kingdom and is part of the efforts aimed at guaranteeing the safety of people and property, reducing the crime rate, regulating traffic flow and protecting public facilities.

This system, which provides for setting 760 CCTV cameras and 220 km of optical fibers, developing two central stations and 22 mobile stations, will integrate tramway cameras and other existing cameras (airport, ports of Casablanca and Mohammedia, supermarkets and banks).

Jointly funded by the Interior Ministry and the town of Casablanca, this project will, through smart techniques, guarantee traffic regulation, automatic incident detection, the timely mobilization of security forces and identification of objects, persons and suspicious vehicles.

It will also contribute in the localization of stolen vehicles, the calculation of the flow rate, the automatic tracking of mobile objects, the dynamic management of cartography, besides the constitution of a facial recognition database.

On this occasion, the Sovereign laid the foundation stone of the central station in charge of traffic monitoring and regulating, which is the heart of this smart video-surveillance system.

Set in Casablanca police headquarters, the station (15 million dirhams) will be built within a period of nine months, on a plot of 500 square meters. It will cover a total area of 2,466 square meters spread over four floors and will feature the state-of-the-art equipment.