Rabat - A video has surfaced online, showing a passerby interrupting a 2M channel reporter, on Monday in Nador, and screaming on the air: “F**k Her Right in The P***y.” 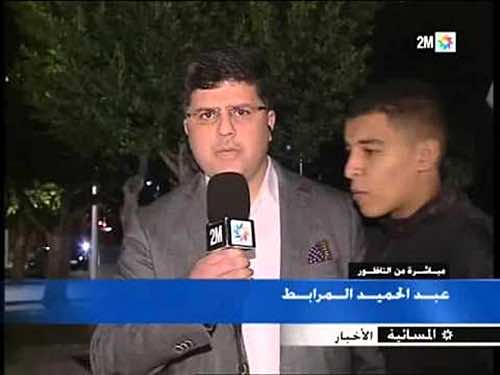 Rabat – A video has surfaced online, showing a passerby interrupting a 2M channel reporter, on Monday in Nador, and screaming on the air: “F**k Her Right in The P***y.”

While Abdelhamid Lamrabet was reporting live for 2M  about the earthquake that hit Nador, in northern Morocco, the young man unexpectedly took to the microphone and yelled, “F**k Her Right in The P***y.”

Lamrabet who was visibly surprised by  this unprecedented interruption, resumed reporting, as the passerby went away.

Mahmoud Ababou, a Moroccan journalist and social media activist, said this action shows that Moroccans no longer take the Moroccan TV channel seriously, especially after it failed to provide enough coverage on the natural disaster that hit several Moroccan cities on Monday.

The “F**k Her Right in the P**y” expression, has become  an international phenomenon, which originated from  a couple of completely fake news bloopers, before it spread rapidly to actual TV broadcasts.

The ‘sleazeball’ that created these videos (JohnCain.TV) boasts so much about the widespread of the videos that he now sells t-shirts with the vulgar slogan.