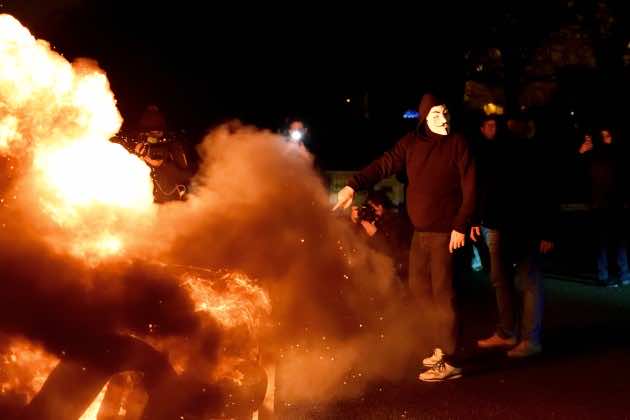 By
Larbi Arbaoui
-
Larbi is a freelance writer and assistant editor at Morocco World News.
Jan 26, 2016
Spread the love

About 1,200 taxi, drivers lead by Taxi Unions, took to the streets to protest against what they call “unlicensed cab firms,” in a nationwide public sector strike.

The drivers said that “the French government has failed to enforce laws designed to protect them from companies like Uber,” which they claim compete unfairly.

According to BBC, “at least 20 taxi drivers were arrested for “violence, carrying weapons and starting a fire.”

Tuesday’s demonstrations coincide with a series of strikes staged by air traffic controllers, civil servants, and teachers across France.

The same source said that “about 5.6 million people went on strike on Tuesday, over wages, working conditions and the cost of living.”

“Unions say they are also protesting against job losses,” the same source said.

The taxi drivers’ strike comes more than a year after French taxi unions staged widespread protests against Uber’s low-cost UberPop service, which they said “give rides to passengers with non-professional chauffeurs.”

Although the Wilaya of Casablanca has previously ruled that Uber’s services illegal, the U.S Company has remained operational expanding into Marrakech, and other Moroccan cities.