Rabat- King Mohammed VI on Wednesday held a phone call with Chancellor of the Federal Republic of Germany, Angela Merkel, the King's office said in a statement. 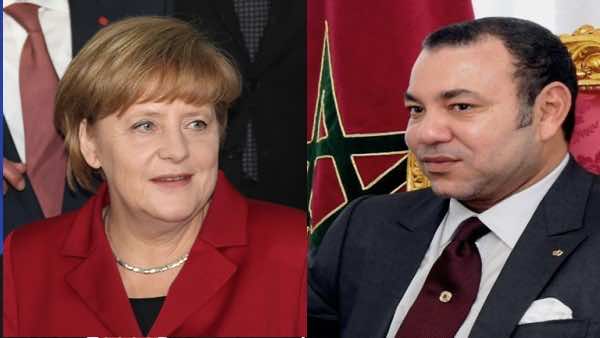 Rabat- King Mohammed VI on Wednesday held a phone call with Chancellor of the Federal Republic of Germany, Angela Merkel, the King’s office said in a statement.

During the phone call, the German Chancellor invited the Moroccan monarch to visit Germany.

The call was an opportunity to discuss the positive development of bilateral relations. In this respect, Chancellor Angela Merkel hailed the dense cooperation between the two countries in various fields and expressed her hope to work to further reinforce it. A hope that was also expressed by HM the King, the same source underlined.

According to the statement, “the recent flows of irregular immigrants, among whom some falsely claim to be refugees, were the results of a humanitarian call, which was diverted from its purpose and was hugely exploited by human trafficking networks active in both shores of the Mediterranean.”

In this context, it was agreed that the Federal Minister of the Interior would visit Morocco as soon as possible to work closely with his Moroccan peer on this issue.

Meanwhile, the Moroccan monarch and German Chancellor agreed that the concerned officials in both countries would immediately reinforce their discussions in order to prepare and study the cases of those irregularly staying in the country, and repatriate them immediately to Morocco.

Following these talks, “Chancellor Merkel invited HM the king to visit Germany. For His part, HM the king invited German Chancellor to visit Morocco,” the statement pointed out.