Brussels - NATO Secretary General Jens Stoltenberg hailed here on Thursday Morocco's dynamic actions within the framework of NATO's Mediterranean Dialogue and the role of the Kingdom as a stable country in the region. 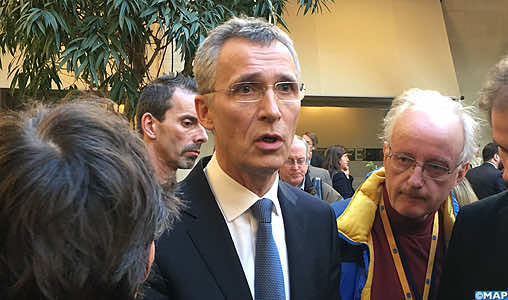 Brussels – NATO Secretary General Jens Stoltenberg hailed here on Thursday Morocco’s dynamic actions within the framework of NATO’s Mediterranean Dialogue and the role of the Kingdom as a stable country in the region.

”NATO has very good relations with Morocco, which is an active member within the framework of the Mediterranean Dialogue and hails its role as a stable country in the region,” Soltenberg told MAP on the sidelines of the presentation of its annual report for 2015.

NATO seeks to stabilize neighboring countries and relies in this context on its Mediterranean partners, he added, noting that “a more stable neighborhood strengthens our security.”

”We are very pleased to maintain good cooperation with Morocco in this context and we want to strengthen it,” he said.

NATO’s Mediterranean Dialogue was initiated in 1994 by the North Atlantic Council.

The Dialogue reflects the Alliance’s view that security in Europe is closely linked to security and stability in the Mediterranean. It is an integral part of NATO’s adaptation to the post-Cold War security environment, as well as an important component of the Alliance’s policy of outreach and cooperation.

The Mediterranean Dialogue’s overall aim is to contribute to regional security and stability, achieve better mutual understanding and dispel any misconceptions about NATO among Dialogue countries.