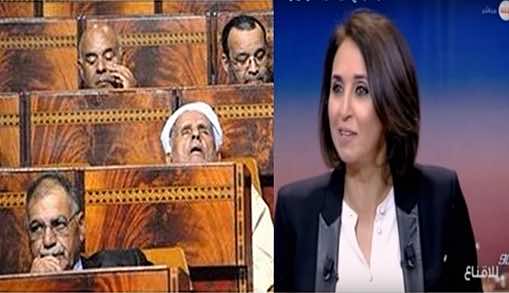 Rabat – Moroccan politician, Nabila Mounib said on Thursday that half of the members of Moroccan parliament sleep, while the second half don’t know what is at stake in the country.

In response to the now infamous statement that Minister Charafate Afilal made on TV calling minister’s pensions “two francs” precipitating scathing criticism on social networks, General Secretary of the Unified Socialist Party, Nabila Munib said that pensions for ministers and parliamentarians are a corrupt “political game” in Morocco.

She stated that all segments of society should benefit from retirement pensions, pointing out that the pension should be adequate to ensure a dignified life.  She called for the cessation of pension to ministers and parliamentarians after their  terms are over. “Ministers are appointed for particulars tasks for which they are paid; those pensions for example could create jobs for the unemployed.”

Munib highlighted that the government is moving to reduce positions for teacher trainee doctors while they deal generously with ministers and parliamentarians. “Our demand is very fair, in democratic countries, the minister is paid only during his term of office,” she said

She stressed, that there is a race to obtain ministry positions in Morocco, pointing out that there are 39 ministers in the government at one time while the number of ministers in other countries is very low.

“We do not need the Minister of Water and Environment and seconded ministers, one Ministry is enough and the same thing can we propose on the other ministries.”

Munib said that the parliamentarian and minister pensions is one of the “manifestations of financial corruption”.

Everyone knows that the majority spend their time sleeping in parliament. Therefore, it is unacceptable that they get pensions while there are other people who work harder and do not get pensions. If they do get one, they get a very tiny one as is the case for some soldiers and others.”