New York - Hundreds of men wearing black masks stormed a shelter in Sweden on Friday night beating up refugee children in revenge for the death of a Swedish social worker allegedly killed by an asylum seeker. 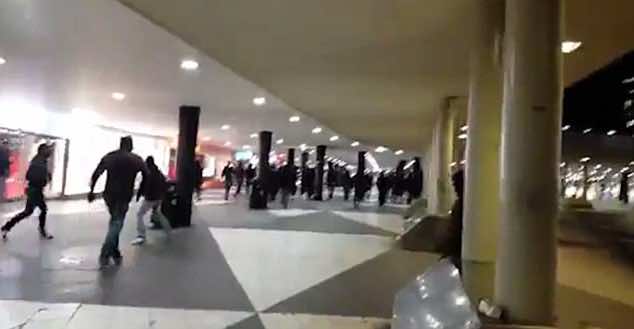 By
Karla Dieseldorff
-
Karla is an award-winning actress and producer.
Jan 31, 2016
Spread the love

New York – Hundreds of men wearing black masks stormed a shelter in Sweden on Friday night beating up refugee children in revenge for the death of a Swedish social worker allegedly killed by an asylum seeker.

The angry mob went on a rampage at the Stockholm train station and attacked asylum-seekers and anyone who did not look Swedish, according to U.K.’s Daily Mail.

The Stockholm station is believed to shelter a number of Moroccan asylum-seekers who were also victims of last night’s attack.

Stockholm Police said that at least 200 unaccompanied Moroccan minors have taken shelter at the city’s main train station turning it into a place of “criminal activity.”

The mob “gathered with the purpose of attacking refugee children,” Stockholm police spokesman Towe Hagg said, adding that “police are now looking into the leaflets that were handed out by masked people before the attack.”

According to the same source, the mob handed out leaflets to passersby with xenophobic messages titled “Enough Now” before storming the shelter.

The men were allegedly acting to avenge the murder of Alexandra Mehzer, a 22-year-old Swedish social worker who was reportedly stabbed by a 15-year-old Somali refugee at a shelter in Molndal, Sweden.

The same source noted portions of the message written on the leaflet, which tried to justify the violent actions of the attackers as the “only way to punish” those whom the Swedish Police does not apprehend.

“We refuse to accept the repeated assaults and harassment against Swedish women,” the leaflet read, adding that “We refuse to accept the destruction of our once to safe society. When our political leadership and police show more sympathy for murderers than for their victims, there are no longer any excuses to let it happen without protest.”

“When Swedish streets are no longer safe to walk on for normal Swedes, it is our DUTY to fix the problem. This is why, today, 200 Swedish men gathered to take a stand against the north African ‘street children’ who are running rampage in and around the capital’s central station,” the note added.

The perpetrators, self-described as “your father, your brother, your husband, your colleague, your friend and your neighbor,” called on to Swedish citizens to do the same and take justice in their hands, “for a better future together.”

Swedish authorities confirmed that 40-50 people took part in the attack, while the leaflet and eyewitnesses claimed there were at least 200 perpetrators beating up migrants at the station, according to Swedish newspaper Aftonbladet.

“I saw maybe three people who were beaten. That was no football brawl or something similar. They targeted migrants. I was quite scared and ran away,” a witness told the newspaper.

According to Swedish Police, the Stockholm train station has been “taken over” by dozens of Moroccan refugee children, who have allegedly become “dangerous, assaulting women and security guards.”

Moroccan minor asylum-seekers are referred to in Sweden as “teen gangs” who run away from government provided housing and roam the streets allegedly terrorizing Swedish citizens.

According to the same source, the Moroccan “teen gangs” consist mainly of orphans from Casablanca and Tangier who have arrived in Sweden seeking asylum.