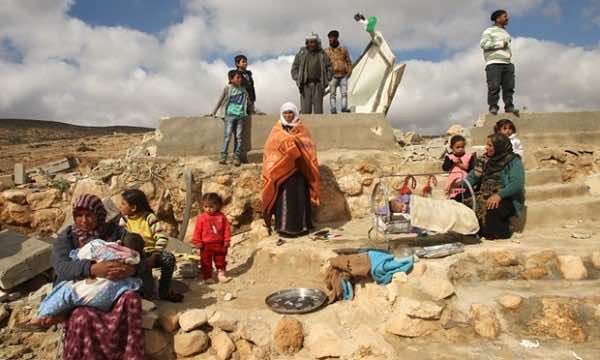 “On Tuesday villagers dug through the remains of their homes, set up temporary tents and transported furniture they had managed to save from houses to the places they planned to sleep,” according to  The Guardian.

The demolitions occurred around 7:00 am local time in the villages of Khirbet Jenbah and Khirbet al-Halawah in the Southern Hebron Hills, in an area known as Firing Zone 918, which was declared restricted military zone by the Israeli government in the 1970s,.

“This is another attempt to expel Palestinian residents from Firing Zone 918,” said Breaking the Silence, an organization of Israeli combat veterans, in a Facebook post. The organization called Tuesday’s demolitions “the largest demolition order” in over a decade.

The Defense Ministry claimed that the buildings did not have the appropriate permits.

“The buildings being demolished in Firing Zone 918 were illegally constructed,” reported The Times of Israel. “During the last two years, the [Defense Ministry] Civil Administration has been conducting a dialogue process with the population in order the legalize the structures. When the building owners showed no willingness to get the situation in order and illegal construction did not stop, measures were taken in accordance with the law.”

Sarit Michaeli, a spokesperson for the Israeli human rights organization B’Tselem, told to AFP that more than 1,000 people could be affected, because 10 other villages could face a similar fate.

At midday on Tuesday, Israel’s High Court of Justice ordered to temporary stop the destruction of the remaining buildings until at least February 9 and required the state to respond by that date. The Society of St. Yves, a Catholic human rights organization, presented the petition against the demolitions.

In May last year, Israel’s Supreme Court ruled that the Civil Administration had the right to demolish Palestinian homes in the West Bank’s Area C because “they were built without permission.” However, residents have argued that they have had no choice, because the Israeli government consistently refuses to give them building permits.

10 of the buildings that were destroyed yesterday were constructed with funds from the Humanitarian Aid and Civil Protection department (ECHO) of the European Commission.

Over 60 percent of the West Bank is considered Area C, making it the largest division in the West Bank under Israeli exclusive administrative and security control. Israel has full authority over building permissions and zoning laws.

According to 2014 figures of the United Nations Office for the Coordination of Humanitarian Affairs (OCHA), approximately 300,000 Palestinians live in Area C, and only about 1 percent of Area C has been planned for Palestinian development.