Rabat - King Mohammed VI of Morocco arrived on Thursday evening in Laayoune, the main city of the Sahara (refereed to in western Media as Western Sahara) in southern Morocco. 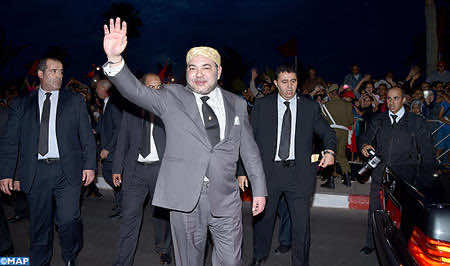 Rabat – King Mohammed VI of Morocco arrived on Thursday evening in Laayoune, the main city of the Sahara (refereed to in western Media as Western Sahara) in southern Morocco.

The king flew to Laayoune immediately after he inaugurated the first plant of the Ouarzazate solar complex (Noor I), and the official launch of the construction works of the second and third plant of this megaproject (Noor II and Noor III).

This is King Mohammed VI’s second visit to the Sahara in less than three months, after he visited the region on November 6 of last year to celebrate the 40th anniversary of the Green March.

The King is due to chair a Council of Ministers on Friday in Laayoune. During this meeting, the Monarch will approve the appointment of new Moroccan Ambassadors to several foreign capitals.

Thereafter, he is expected to inaugurate and launching socio-economic projects that he had initiated last November on the 40th anniversary of the Green March.