Dakhla - The population of the of Dakhla in the Sahara reserved a warm welcome for King Mohammed VI upon his arrival Saturday to the city for a visit during which the Moroccan monarch is expected to launch and inaugurate several multi-million dollar socio-economic projects. 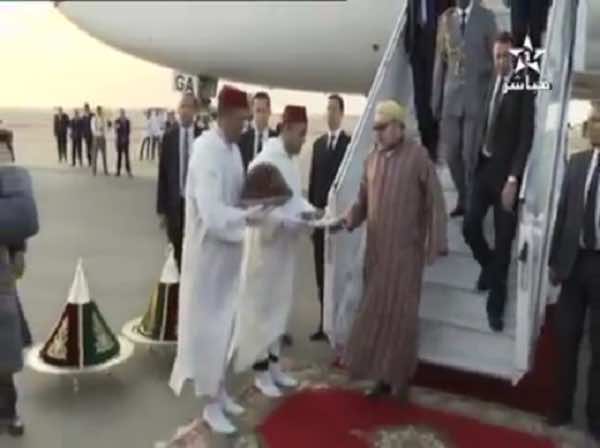 Dakhla – The population of the of Dakhla in the Sahara reserved a warm welcome for King Mohammed VI upon his arrival Saturday to the city for a visit during which the Moroccan monarch is expected to launch and inaugurate several multi-million dollar socio-economic projects.

The main streets of Dakhla: the avenues Al Walae Mohammed V and Moulay Rachid, along with its major squares: Hassan II, Sidi Ahmed Laâroussi and Mohamed Fadel Semlali, were draped with national flags, welcome banners and huge portraits of the King. Tens of thousands of people poured along the path followed by the royal procession to cheer for the King and reaffirm their attachment to Morocco and its sovereignty over the territory.

Dakhla’s elected officials and civil society activists reiterated their unwavering commitment to defend the territorial integrity of the Kingdom.

In statements carried by Maghreb Arab Press (MAP), citizens expressed their pride following the start of this royal visit. Those interviewed commended the continuous efforts of the King to launch large-scale projects that will bring progress and prosperity to the region and generate job opportunities for its growing population.

Along with Laayoune, Dakhla is one of the main cities of the Sahara, referred to in Western media as the “Western Sahara.” The territory, which has been under Morocco’s sovereignty since 1975, is claimed by the Polisario Front. Supported by Algeria, its main backer, as well as Nigeria and South Africa, the breakaway movement claims to be the only legitimate representative of the Saharawi population.