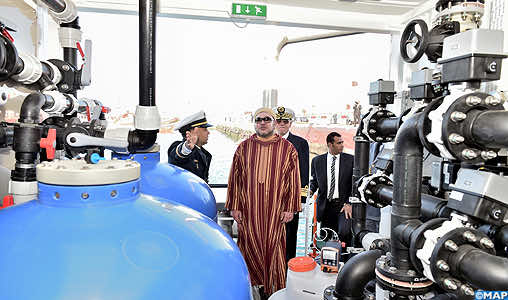 To accompany the demographic and urban development of the city, these projects will consolidate the new development model of the southern provinces, launched by the Sovereign on the occasion of the fortieth anniversary of the Green March, which aims to improve the living conditions of inhabitants and provide an appropriate response to sustainability issues.

Thus, the sanitation project in Dakhla (245 million dirhams) aims to provide sustainable solutions to the urbanization challenges. It is meant to enhance the tourist attractiveness of the city, preserve the ecosystems and promote the socio-economic development of the region.

As part of the national sanitation program (NAP), this project provides for building an “activated sludge” wastewater treatment plant with tertiary treatment of a capacity of 150,000 Equivalent/capita and a daily flow of 10,000 m3.

It also consists of laying 21km of supply and interception of wastewater collectors, building five pumping stations and transfer structures of treated water for recycling needs.

As for the project to strengthen the drinking water supply of the city of Dakhla, it comes to meet the growing demand for drinking water in this southern region of the Kingdom.

This project provides for building and equipping six wells for water withdrawal, laying 15 km of pipes, building a water treatment and demineralisation plant with a capacity of 17,000 m3/day and establishing distribution facilities (3 reservoirs and two pumping stations).

Benefiting more than 106,000 inhabitants, this project required a total budget of 250 million dirhams and provides for complementary works of demineralisation at the existing treatment plant with a flow of 9,500 m3/day.

On this occasion, the King inaugurated the treatment and demineralization plant, a major component of the project to strengthen the drinking water supply of the city of Dakhla.