Rabat - The Arab Women Parliamentarians Network for Equality "Ra’edat" was officially launched Tuesday with the aim of boosting women’s participation in the political decision-making process in the region. 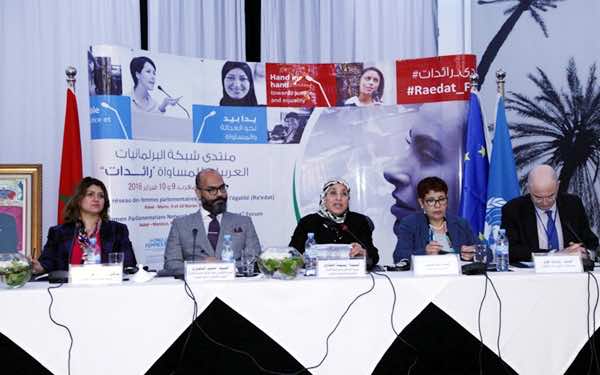 Rabat – The Arab Women Parliamentarians Network for Equality “Ra’edat” was officially launched Tuesday with the aim of boosting women’s participation in the political decision-making process in the region.

Ra’edat (Pioneer women in English) was launched during its first forum, held in Rabat on February 9-10, to discuss a unified agenda towards a more gender-responsive policy in the region and the inclusion of women in politics.

The network brings together over 100 current and former women parliamentarians, representing 12 Arab countries.

Speaking at the opening ceremony of the forum, president of “Ra’edat”, Rula Al Farra Alhroob said that this network seeks to attract 200 members and 50 pc of former and current women parliamentarians in Arab countries by the end of 2016.

“Advocating women’s right to equal representation in the decision making process is not only our duty towards women, it is our duty towards our countries because women’s participation makes a difference and enhances the quality of policy making,” Rula Al Farra Alhroob added.