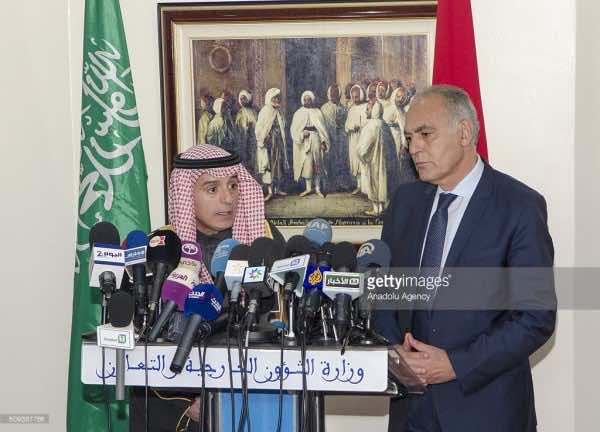 Rabat – Moroccan Foreign Minister Salaheddine Mezouar has announced today that Morocco will support Saudi Arabia in any action against those seeking to threat the stability of the Gulf region.

Mezouar made the comments during a joint press conference with Saudi First Minister Adel al-Jubeir. This is the Saudi minister’s first visit to Morocco since his appointment in 2015.

“We are in complete solidarity with Saudi Arabia in confronting any disturbance in its internal affairs,” Mezouar said.

Referring to Yemen directly, he continued in saying that the Saudi-led military action, which Morocco participated in, “proved that it was launched to defend legitimacy.”

The press conference comes just two days after al-Jubeir visited Washington to discuss the ongoing conflict in Yemen and potential military intervention in Syria. “We will discuss details with experts from the countries involved to decide on the nature of the participation,” he said on the matter.

Ties between the two countries have become exceptionally strong in recent times. In January of this year, it was announced following meetings between the countries’ defense ministers that a donation of $22 billion would be made to the Moroccan Armed Forces by Saudi Arabia to improve the military industry.

“[The Saudi] giants of the defense industry [make a] commitment to provide the support and expertise needed to take Morocco’s status from client to producer of weapons,” Arabic daily newspaper Al-Massae last month. Morocco authorities have neither confirmed neither denied such reports.

This week, reports from CNN suggest that Morocco may also be on the brink of joining Saudi Arabian forces in ground operations against ISIS in Syria.

Two senior Saudi officials also made the as-of-yet unconfirmed claims that plans for a collaboration was in place. Before any operations are executed, Moroccan troops allegedly will join those from Turkey, the United Arab Emirates, Qatar, and Bahrain in Saudi Arabia to participate in the military exercises.