Rabat  -  Morocco and Saudi Arabia stressed Wednesday in Rabat that the settlement of the Syrian crisis necessarily goes through a political transition led by the Syrian people. 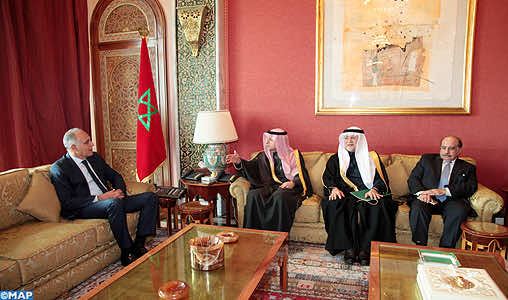 Rabat  –  Morocco and Saudi Arabia stressed Wednesday in Rabat that the settlement of the Syrian crisis necessarily goes through a political transition led by the Syrian people.

The two countries “consider that the settlement of the Syrian crisis can only be achieved by allowing the Syrian people lead a political transition, while maintaining the State’s institutions and ending the cycle of violence, terrorism and the humanitarian crisis in Syria”, Foreign Minister Salaheddine Mezouar said at a joint press briefing with his Saudi peer Adel Al-Joubeir following their meeting in Rabat.

Morocco’s top diplomat stressed that Morocco and Saudi Arabia categorically reject any use of communitarianism and any intervention in the internal affairs of the countries, adding that this is a “fundamental and immutable principle.”

Saudi Foeign minister noted that his country “ready to provide the necessary aid to the brotherly people of Syria in order to find a solution to this crisis and build a new future for Syria without Bachar Al-Assad.”

“We are willing to maintain the institutions of the Syrian state and putt an end to war in Syria,” the Saudi top diplomat added.

“There will be certainly a plan B in case of failure of the political process in Syria, but we currently cannot talk about this plan and its details,” Adel Al-Joubeir pointed out.

He recalled that his country is always ready to dispatch ground troops to Syria if the coalition against ISIS agrees to send ground troops.

As for Yemen, Mezouar said that the two sides consider that the Operation Decisive Storm was triggered to “defend legality in this brotherly country and restore peace and security.”