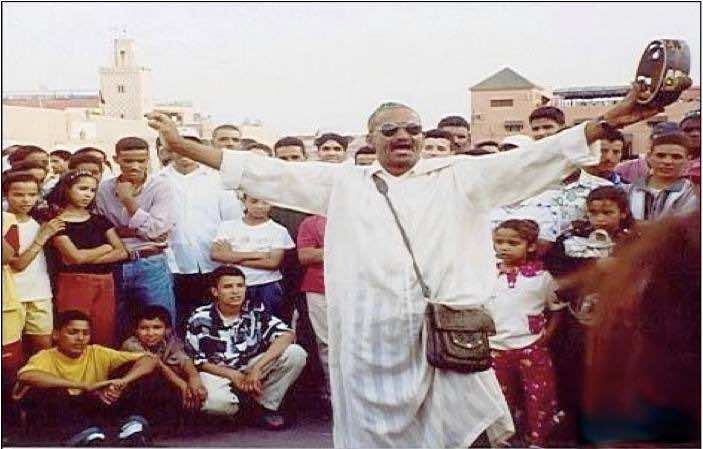 Rabat – This article seeks to discuss the question of culture, art, and identity in Morocco. It aims to do so by analyzing the role art plays in consolidating the notion of nationalism, spreading it, and helping individuals, and the society as a whole, preserve their cultural identity.

Amid the modern globalized culture which is turning the world into a small village, it is hard to keep oneself distanced from the wave. As a result, the fear of losing ones’ identity became a concern. Many are wondering how to save their cultural heritage from loss and balance themselves between a globalized culture and a local one. This piece, which deals with Morocco and Moroccan popular art, attempts to shed light on a popular tradition of artistic expression, Halqa,[1] and highlights its role as popular entertainment of the local culture and national identity, saving it from loss. It provides a detailed description of this site-specific art and tries to connect it to the process of forming Moroccan individuals and the society, in general, as a social entity with a definite identity.

One of the most specific theatrical forms that Morocco is famous for is “Halqa.” This type of theatrical performance does not take place in theaters, closed stages, saloons, or opera houses. It is tied to open spaces such as ‘Jamea Lefna’ in Marrakech, weekly Souks,[2] popular markets (Souika), and pavements of crowded streets. Halqa, as a drama, does not need many actors, it is usually lead by one main performer,‘Lhlaiqi.’ Additionally, this figure is usually accompanied by women dancers, musical instruments, or non-human assistants such as obedient pets, tamed snakes, or well-trained monkeys and donkeys that can perform extraordinary actions and understand the language of the master.

The ‘hlaiqi,’[3] through heroic action and well-made rhetoric, addresses all generations that crowd around him in a funny and ironic way. He acts, talks a lot, speaks to animals that act according to his orders, makes fun of members of the crowd, plays the fool, talks politics, imitates sounds, and does gymnastics for a few coins or will ask only for good wishes as compensation for his art. Halqa is purely a Moroccan genre of drama that has deep cultural dimensions that stem from the heart of the community’s cultural lore.

What is Halqa as a site-specific Moroccan theatrical tradition? This will be explained by exploring the role of this art form in entertaining audiences, shaping identities, and spreading information and wisdom.

Halqa is an ancient Moroccan form of art. It is a theatrical performance, a play held in outdoors. What makes it different from theatre is its content and the specific locations it is held. Halqa relies on storytelling as well as instant, witty improvisation and spontaneity.

The open zones where most Halqas are held really hold attention. Halqa are performed in areas that are crowded and very popular. There are places in certain Moroccan cities that are famous for holding Halqas on a daily basis. Fun chasers, who know about places where Halqas are held, from both in and out of Morocco, may travel hundreds of miles to enjoy Halqa shows. Professor Khalid Amine explains this:

Al-halqa is the most overtly theatrical among several artistic spaces in the market place as well as in other public spheres such as the gates of ancient Moroccan medinas (bab rwa:h, bab al-mqa:m, bab mansu:r l?lej, Jema’ el-fna, bab fahs…).[4]

There are some laws that Halqa, as a traditional art, never breaks. Its characteristics are widely known among popular masses all around the nation and tourists who are well acquainted with the general mood of life in Morocco. The specific locations of Halqa must be open, wide, crowded with people, and compatible with its mimetic art that relies on storytelling. A theatrical institution would not work for a Halqa to be held, while a corner on the pavement of a street will do very well. Professor Amine defines Halqa as:

Al-halqa is a public gathering in the form of a circle around a person or a number of persons (hlayqi / hlayqia) in a public space (be it a marketplace, a medina gate, or a newly devised downtown square). It is a space of popular culture that is open to all the people from different walks of life.[5]

The circles of Halqa are formed by people who like to listen to what Lhlaiqi says and enjoy his charming shows. In fact, Lhlaiqi never invites people to the ring, nor does he ever call peddlers to gather around him. He simply chooses the right spot to give his show and spontaneously starts performing his art. Knowing that everybody is welcome to watch the show, ready to give a coin or just watch and applaud, people form a loop around Lhlaiqi with no pre-arranged meeting. Halqa could better be described, at the level of content and means of communication with audiences, in the following words:

Al-halqa hovers between high culture and low mass culture, sacred and profane, literacy and orality … Its repertoire combines fantastic, mythical, and historical narratives from Thousand and One Nights and Si:rat bani: hila:l, as well as stories from the holy Quran and the Sunna of the prophet Mohammed (peace be upon him) along with local witty narrative and performative forms. The medium of the halqa also varies from storytelling to acrobatic acting and dancing.[6]

What makes Halqa a highly demanded popular and famous art is its multifunction. Halqa does not only entertain, it instructs, informs, teaches, and preaches on different sacred and profane matters. It has a decisive role in shaping identities. Humor is always the main end Halqa is set for. A Halqa show is always full of action, zealous sounds of tambourines, and wise and witty talks. Khalid Amine writes:

Yet, how does al-halqa contribute to the shaping of both Moroccan individual and communal identity? Is it functional in the construction of Moroccan cultural identity or simply a mere transmission belt that does no more than reflect a given environment? In all its diversity, al-halqa has been a vital source of artistic delight and entertainment, as well as a means of spacing cultural identity. In other words, besides its aesthetic aspects –given the fact that it should be conceived of as a performance event- it is a medium of information and circulation of social energy, a social drama and a subsidiary school whose syllabus is as fluid as its rich repertoire. In sum, al-halqa contributes to the representation of historical consciousness and cultural identity, through formulaic artistic expression.[7]

It seems that Halqa is not a mere performative funny show. It is a social drama, a school, a medium of energy, a syllabus, a means that represents history, consciousness, and identity through artistic expression. Halqa’s active role and endless charms are best summarized in these few words:

Al-halqa is a popular performance framed in a circular architecture and characterized by making a spectacle as a process in motion rather than a final product presented to a passive consumer.[8]

As a “traditional pre-theatrical form of orature,”[9] Halqa classifies as a rich oral, cultural tradition which contains a large amount of lore. It is not only that, Halqa is a medium in which all kinds of disciplines are mixed. Taking history as an example, in Halqa shows one could find the history of a whole nation, from colonial times to now. Nevertheless, in Halqa everybody finds part and parcel of him, of his story in the village, of his people and rulers, and of the daily funny moments that masses go through. All such events come out in a comedic and entertaining manner.

[1] The word ‘Halqa’ is a direct translation of the word in Arabic.

[2] Weekly Souks are markets that are held on the same day of the week. On such occasions, people from different walks of life and social classes gather in large numbers to buy merchandise, food, and materials. Lhlaiqi uses this opportunity to show visitors some fun.

[3] Hlaiqi is the performer of Halqa; he is the one dramatist who both produces the show of Halqa and performs it at the same time. His roles inside the ring of Halqa have no limits and vary according to the subject that is the main focus of his show.