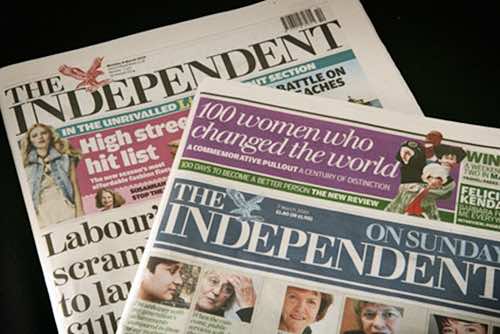 Rabat – The Independent, one of the most well-known British newspapers, will cease to exist in print format starting in March this year, and will continue only as an online service, the paper’s owner has said.

What does this mean for print journalism? Is it doomed to a slow, irreversible decline or is this simply a one-off? Can we still write balanced, informed news pieces and gain popularity, or are uninformative ‘shock’ headlines the only means of survival?

Some more subdued commentators have claimed that all print media are destined to go the way of The Independent.

Speaking on BBC the day before the move was confirmed, Independent co-founder Stepehen Glover claimed this was the beginning of the end for many print news outlets:

“The Financial Times and the Guardian could also stop producing print editions within the next few years, and in 10 to 15 years there would not be very many printed newspapers,” he said.

Journalism expert Brian Cathcart used his article in the Guardian to back up this view. “No one can say in what order it will happen, but it will happen to the most venerable titles, even to the top-selling Sun and Mail.”

From a personal perspective, I believe the change has come around for three key reasons: time, cost and attention span.

The Internet age has made the vast majority of people less willing to wait for services when they don’t necessarily need to. Why walk to the local newsstand to buy a newspaper when a potentially more updated version of events is already available online or on your phone?

The cost of newspapers is also an avoidable expense. Currently, tabloid paper ‘The Sun’ is the biggest seller in Britain, and costs only 40p. The Independent, on the other hand, costs £1.60.

Obviously the Sun can afford this, as the style of journalism they produce is less subtle, and subtlety doesn’t sell. The blatantly inflammatory ‘1 in 5 Muslims’ headline they printed in November of last year, claiming that 20 percent of Muslims sympathize with jihad, is a great example of this. The fear that this was true encouraged sales, as it made people feel unsafe, and they felt they needed to protect themselves. Obviously The Sun had to apologize, as it was revealed the accusation was false, but they knew that even before they published it.

More serious news-oriented papers like The Independent cannot print that sort of headline. People would generally have to be interested in the paper before buying it. This makes their job more difficult.

For the reasons of time and cost as I stated above, I can’t personally say I buy newspapers other than the occasional purchase of The Independent’s cheaper and more compact sister paper ‘The I’, though even with the same price of 40 pence this doesn’t achieve anywhere near the sales of the Sun. Does this mean that journalism can no longer exist unless it is dumbed down, and informed discussion is dead? Perhaps not.

For me, online sources of information such as Twitter, alongside online news, generally popularize the sorts of discussions papers like The Independent encouraged, displaying opinions in new and varied ways.

If the death of printed broadsheet journalism is nearly here as so many predict, it is important to see that their function of informing discussion has not become obsolete, but only the format in which they present it.