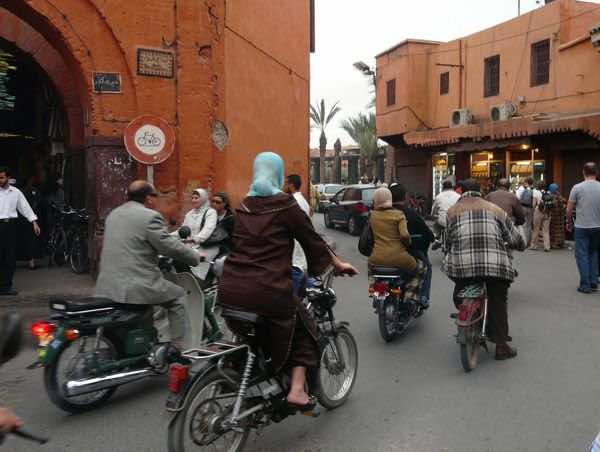 Marrakech – In talking about Marrakech and its people, the topic of transportation often comes up at some point. Since I was an undergraduate student, I have noticed that the vehicle of choice most people use to make their way around the city is the motorbike. I used to not think about the overwhelming presence of bikes in Marrakech.

Yet, one day, while coming out of class and going through the parking lot I thought, “Why are there so many motorbikes in Marrakech?” Thus began my quest to find the answer to this question. As part of my investigation, I curiously asked some Marrakechi, including my classmates, why they and the rest of the city overuse motorcycles in the city. In turn, they provided me with some interesting, convincing arguments about the issue.

To begin, the streets of the old medina, wherein most Marrakechi live, are narrow and overcrowded. Thus, people have no way to move around the medina using any vehicle other than the motorbike. People tend to rely on motorbikes to get around easily through all the small places in the medina. More important, most of the houses in the medina are small and have no garages nor places where to put any vehicle when not used. Motorcycles do not require much space like that cars, for instance, do, and, therefore, are more preferable.

Because Marrakech is characterized by its flat geographical areas, people have no difficulty to move around in the city using motorbikes. Marrakech fortunately has no steep roads to slow down the activity of motorcycles there. Thus, the level surface of the city greatly helps people to move about smoothly without any need to increase the speed of their motorbikes. This undoubtedly encourages the people of the city to rely on motorcycles.

As all people seek to be more-thrifty with their money, the Marrakechi people very wisely prefer to use motorbikes to get to their destinations, and spend less on gas and maintenance doing so. Motorbikes are cheaper to purchase, fuel, and repair in comparison with cars. This makes them the best choice for anyone: students who need to get to school; street vendors who rely on them to sell their wares; and bread distributors who ride them to make their shop-to-shop deliveries.

In addition to saving money, motorbikes save you time as well. With a motorbike, you can make your way between stopped cars and zip through the streets in record time. Moreover, some motorcyclists can even use the street pavement in case the road is overcrowded and blocked. Others just prefer motorbikes to free themselves from the road rage incidents that may sometimes occur during a traffic jam. In short, nothing can hinder or delay a motorcyclist in reaching his destination.

Another reason is that the Marrakechi tend to go far with less. Historically speaking, the people of this city are characterized by their creativity and craftiness. As such, they enjoy what they have in a humorous way. For most Marrakechi, a motorbike is just enough to satisfy their needs.

Even some rich people and university teachers, who can afford cars, prefer motorbikes. Some youngsters like to make body and sound modifications to their motorbikes. The use of motorcycles can be a matter of imitation of others, too. As people tend to imitate their friends, neighbors and parents, most of the people in Marrakech, especially youngsters, use motorbikes just because they see other people of the city use them.

Omar El Qayedy is a second year MA student of linguistics at CaddiAyyad University in Marrakech 2014-2016. He graduated with an English BA form the same university. Most of his writings are essays and poems about his life.