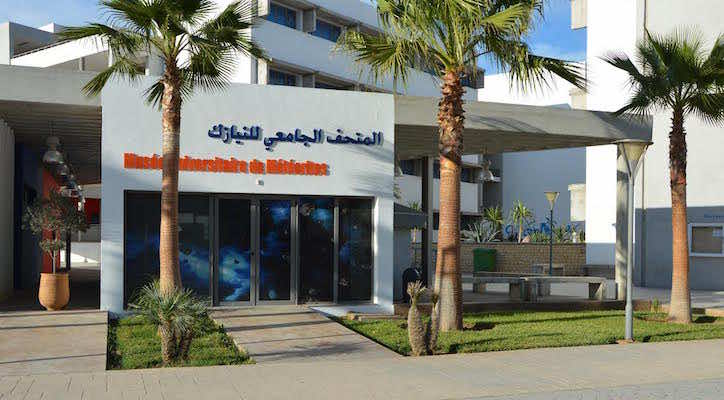 Rabat – On Friday, February 12, 2016, the first university Museum of Meteorites in Morocco and Africa opened in Agadir in the presence of the Ministers of National Education and Higher Education, as well as Mrs. Zineb El Adoui Wali of Sous-Massa province, and the President of the University of Ibn Zohr.

The museum is run by the Ibn Zohr Astronomy club under the supervision of Dr. Abdurrahman Ibhi, who specializes in the science of meteorites in the Faculty of Sciences, and the President of the Department of Astronomy at Ibn Zohr University.

Abdurrahman Ibhi called for the creation of the museum as a headquarters to preserve meteorite samples and to limit Morocco’s loss of this geological heritage which is sold to foreigners and international museums.

The museum is designed and prepared to discover the best of these samples.

This museum is open to a wide range of people interested in learning how to identify space rocks. It provides all aspects of celestial stones and simplified information to visitors concerning the phenomena through the history of meteorites in Moroccan records.

A meteorite is a fragment of rock or iron from outer space, usually a meteoroid or asteroid, that survives passage through the atmosphere to reach the surface of the Earth. Meteorites are believed to originate in the asteroid belt between the planets of Mars and Jupiter. A meteorite may range in size from less than a gram to more than 60 tons.

Meteorite markets came into existence in Morocco in the late 1990s. This trade was driven by Western commercialization and an increasing number of collectors. The meteorites were supplied by nomads and local people who combed the deserts looking for specimens to sell.

Thousands of meteorites were distributed in this way, most of which lack any information about how, when, or where they were discovered. These are the so-called “Northwest Africa” meteorites. When they get classified, they are named “Northwest Africa,” abbreviated NWA, followed by a number.

It is generally accepted that NWA meteorites originate in Morocco, Algeria, Mali, and possibly even further. Nearly all of these meteorites leave Africa through Morocco. Scores of important meteorites, including ones from the moon and Mars, have been discovered and made available to science via this route.