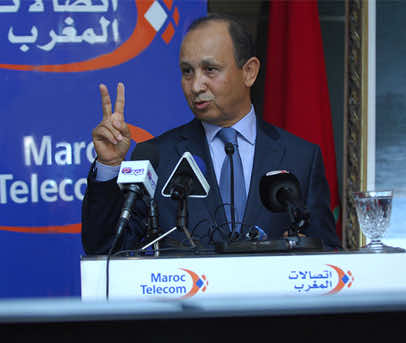 Rabat – Maroc Telecom Group published its financial results for 2015, recording a growth rate of 17.1 percent compared to 2014. This translates to an increase in revenue of MAD 34.1 billion for Maroc Telecom. The group experienced 62.3 percent annual growth among its international operations.

This strong growth is primarily due to the operator’s acquisition and integration of six new African branches on January 26, 2015.

The number of Maroc Telecom customers at the end of 2015 reached 51 million, which represents a growth rate of 26 percent. This figure includes customers in ten African countries who use the operator’s services.

Maroc Telecom also experienced a significant increase in revenue from both mobile and fixed high-speed Internet. The operator successfully launched 4G + Internet for mobile phones in 2015.

While presenting these results, the Chairman of Maroc Telecom’s management board, Abdul Salam Ahizoune, said, “Maroc Telecom Group is finishing fiscal 2015 with results that exceed its objectives and which confirm the Group’s growth profile. The major capital investments in very high speed mobile and fixed-line broadband consolidate our leadership in Morocco.”

He added, “The successful integration of the new African subsidiaries strengthens the success of the Group’s international expansion.”

“Maroc Telecom Group is tackling fiscal 2016 with confidence, despite the still uncertain regulatory, economic and competitive environments backed by the quality of its teams and its continuing policy based on innovation and investment,” Ahizoune said.