Salé -  King Mohammed VI launched, on Monday in Salé (Rabat twin city), the 2016 national solidarity campaign, a Royal initiative which illustrates the permanent commitment of the Sovereign to promote noble human, civilizational and religious values of the Kingdom. 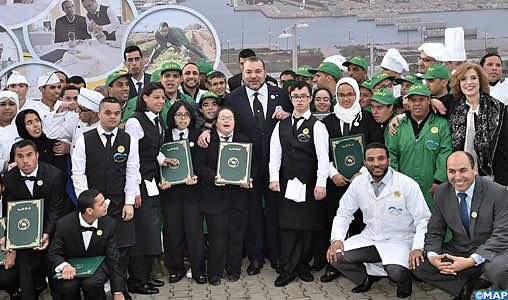 Salé –  King Mohammed VI launched, on Monday in Salé (Rabat twin city), the 2016 national solidarity campaign, a Royal initiative which illustrates the permanent commitment of the Sovereign to promote noble human, civilizational and religious values of the Kingdom.

Held under the actual chairmanship of the King, who has set social action as a national priority, this annual campaign will be organized by the Mohammed V Foundation for Solidarity on February 15-25 under the motto “United to Help the Poor”.

This campaign represents a precious opportunity for all Moroccans to renew their commitment to the values of citizenship and solidarity, through their contribution to the actions and projects carried out by the Foundation for needy people in the different regions of the Kingdom.

The National Solidarity Campaign aims at raising funds to finance social projects and implement the action plans that have evolved over the years to meet the needs of targeted populations.

The Mohammed V Foundation for Solidarity allocates, in order of importance, its resources to projects run by NGOs or directly to the people, including the poor and people in a precarious situation.

The Foundation resources are also dedicated to finance projects related to training, qualification and socio-professional integration of the target population (youth, women, and people with special needs). They are also used to finance the “Marhaba” operation held every summer to welcome Moroccan expatriates, provide food support to the needy during the holy month of Ramadan, and sustainable development projects and humanitarian activities both in Morocco and abroad.

The 18th National Solidarity Campaign is held under the theme “Professional integration of young people with mental disability”, a social category the King gives a particular attention to promote equal opportunity for all.

The King also inaugurated the Center of Integration and Help through Labor in Salé, for people with special needs, built by the Mohammed V Foundation for Solidarity with a budget of MAD 36.5 million.

The first of its kind in the Kingdom, this new facility provides an original response to the socio-professional exclusion of young people with disabilities, through putting them in real work conditions and enabling them to gain professional integration and appropriate social autonomy.

Under the Mohammed VI National Center for people with special needs (CNMH), this center will offer, in its first year, training for 41 young men and women, including 14 Down syndrome and 27 mentally retarded people. The center and its outbuildings will host up to 150 young workers.

This center, which is built in partnership between the Mohammed V Foundation for Solidarity, the Interior Ministry, the Office of Vocational Training and Labor Promotion, Crédit Agricole du Maroc, Banque Centrale Populaire and the Center for Integration and Help through Labor in Salé, will encourage the development of professional identity for the beneficiaries, their financial autonomy, their self-esteem and their knowledge of the other, fundamental bases for an active participation in the social life.

After visiting the new facility, the King handed the keys of 12 minibuses for the transport of people with disabilities, a grant from the Mohammed V Foundation for Solidarity to NGOs working for people with disabilities and active in the cities of Oujda, Tiflet, Rabat, Fès, Marrakech, Azilal, Essaouira, Safi, Inezgane Ait Melloul, Tata and Tinghir.

On the occasion of launching the National Solidarity Campaign, a tribute was paid to the memory of Zoulikha Nasri, a former adviser to King Mohammed VI.

King Mohammed VI also handed diplomas to 12 graduates of the 2015 training pole at the Mohammed VI national center for people with special needs.