Rabat – Morocco ranks 150 out of 197 countries in providing children access to the judicial system according to a ranking published by the Child Rights International Network (CRIN), an advocacy organization that studies global compliance to the UN Convention on the Rights of the Child (CRC).

The rankings consider whether children yield the power to bring lawsuits when their rights are violated, the quality of legal resources available to them inside and outside the courtroom, and whether judges consistently apply international law on children’s rights within their rulings, according to a press release by CRIN. 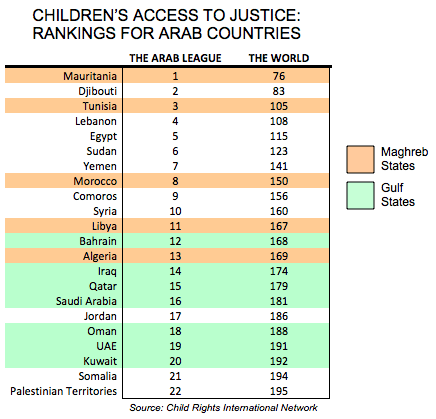 Twenty out of 22 Arab League countries ranked in the bottom half of the list the Palestinian territories trailing at 195th place. The only Arab county that did well is Mauritania, which ranked leading 76th place. Morocco ranked eight amongst Arab countries. Belgium topped the global ranking.

In July 2014, the CRIN published a report detailing Morocco’s progress in implementing the CRC. According to the report, Morocco ratified the CRC in 1996 and gives precedence to the treaty over domestic law in cases where there is a conflict.

However, no Moroccan case citing the CRC in its ruling was found through the course of the organization’s investigations. In addition, though children’s testimony is heavily considered in matters of custody, parents often opt out of reporting sexual abuse to law enforcement officials in order to protect the child socially, the report continued.

Following children’s access to the judicial system is essential in order to protect them from being abused by the law and malignant aspects of society, Veronica Yates, director of CRIN, said

“When we think of children and justice, the first image that comes to mind is usually one of children breaking the law,” Yates said.

“Rarely do we consider children and their right to use the legal system to protect their human rights or to seek redress when their rights have been violated.”