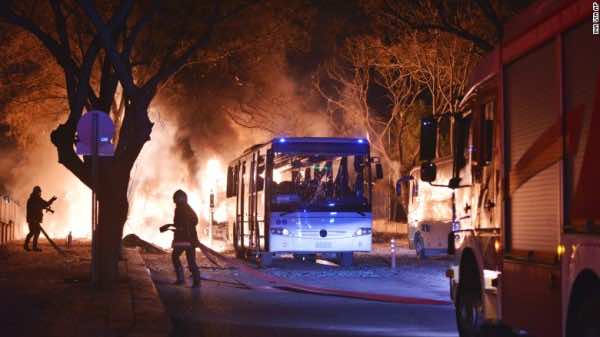 Rabat – At least 28 people were killed, and 61 injured in Turkish Capital, Ankara, this afternoon after a vehicle full of explosives exploded near the Parliament buildings and military headquarters, according to Deputy Prime Minister Numan Kurtulmus.

Kurtulmus described the incident as “an act of terror”, though responsibility for the attack has not yet been claimed.

The attack appeared to target the military, as three of their vehicles along with one privately owned vehicle were caught in the blast, as they stopped at traffic lights.

Plumes of smoke could be seen looming over the city this afternoon, following what is the second deadly attack in Turkey this year after last month’s Istanbul explosion – for which the so-called Islamic State (IS) were blamed.

President Tayyip Erdo?an, who cancelled his planned trip to Azerbajin following the news, vowed to retaliate to the act of violence, according to AFP.

“Our determination to respond in kind to attacks taking place inside and outside our borders is getting stronger with such acts,” Erdogan said. “It must be known that Turkey will not shy away from using its right to self-defence at any time, any place or any occasion”

Many had feared that Turkeys high level of involvement in the complicated Syrian civil war would lead to more attacks of this nature. With recent attacks from the country on the Kurdish army, their links with Saudi Arabia’s planned military intervention, and their ongoing dispute with Assad-allies Russia all being potentially serious security threats.