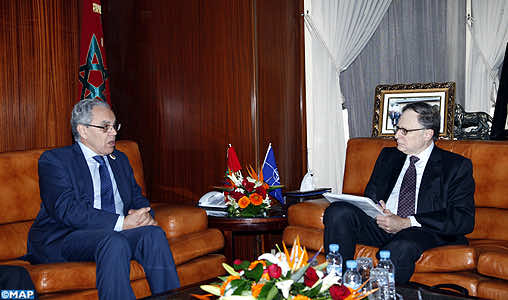 During these talks, the two sides reviewed the various areas of cooperation between the Kingdom and NATO, as part of bilateral relations or within the framework of NATO’s Mediterranean Dialogue, the Moroccan National Defense Administration said in a release.

This cooperation, which is deemed as structured, regular and diverse, which encompasses training, exchange of expertise, and forces inter-operability, is marked by frequent exchange visits of high-ranking officials, the release added.

The two sides also hailed the important progress achieved in all these fields, and expressed their satisfaction with the excellent partnership ties between the kingdom and NATO.

They discussed ways to further strengthen bilateral cooperation and expand it to other fields, notably cyber security.

The two officials also tackled regional security situation. In this regard, Vershbow underlined that NATO considers Morocco as a privileged and credible member of NATO’s Mediterranean Dialogue, praising Morocco’s active commitment to promote peace and its role as a stakeholder of regional stability in the wake of the great security challenges facing the world right now.

Morocco is member of NATO’s Mediterranean Dialogue since its launch in 1994 by and benefits from associate Status to NATO’s parliament assembly.